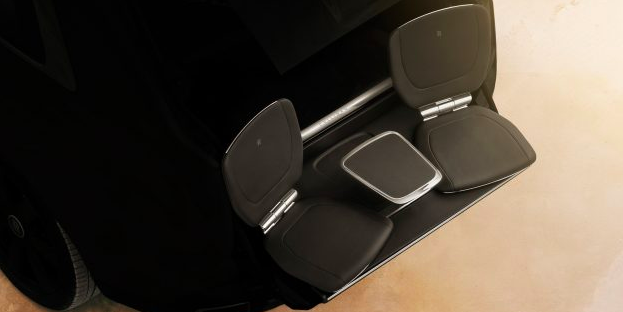 Rolls-Royce, in a bid to keep anticipation for its upcoming Cullinan simmering, has chosen to show the rig’s tailgate seats. It’s an odd feature to highlight from the first-ever Rolls-Royce SUV, but just look at those perches! They deploy on their own from the Cullinan’s cargo area—the Cull’ has yet to debut, hence why it’s darkened out of the photo—and appear to be the perfect place from which to watch income disparity grow.

Shaped vaguely like a pair of ye olde Apple iBook laptops, the seats make up what Rolls-Royce calls the “Cullinan Viewing Suite.” A small table rests between them, and of course fine leather covers their shells. Suggested uses include taking in “the world’s most breathtaking vistas” or, for when owners feel like mingling amongst the normals, “a sports event.” Polo, perhaps

While the idea of built-in lawn chairs seems novel, other fancy-schmancy SUVs such as the Bentley Bentayga and Land Rover’s top-flight Range Rover already offer the feature. But we suspect none of those can match Rolls-Royce’s ability to make everyone at your destination question their life choices.

Next post Advanced Locking System: A Step towards Convenience and Security

Previous post The Italdesign ZeroUno Roadster: For When A Pagani Is Just too Commonplace