The New Buick Regal Looks Like A Mazda, And We’re Totally Cool With That 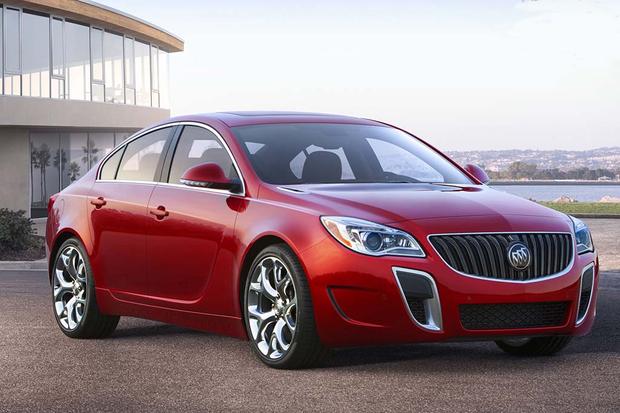 Yes, this undisguised Opel Insignia, which will be brought here as the next Buick Regal, looks a lot like a Mazda. You can see it in the grille and headlights, especially – in fact, if you look at one of the photos with tape blocking out the badge in the middle of the winged grille, you might think this is a new Mazda6. The thing is, Mazdas look pretty darn good, so no one’s complaining.

And when you look at the rest of the car, there’s a fair amount of originality going on. Aside from the GM-generic taillights (they look like they could fit on a Chevy, right?) the lines and details are all pretty fresh, and there are some design elements pulled from Buick’s gorgeous Avista concept. A sweeping roofline leads to some healthy shoulders at the back, creating a coupe-ish profile with a very abbreviated rear deck. This appears to be a hatchback model and not the four-door sedan, but the general look should carry over. This is definitely a big improvement over the somewhat bulbous current-generation Regal, which also started life out as an Insignia.

The car shown here is the Insignia OPC model, with Brembo brakes, big wheels, side skirts, and a front end with big (likely fake) intakes. It will most likely translate to a Regal GS for our market, as is the case with the current OPC and GS. The new Regal/Insignia is expected to use the same platform as the new Buick LaCrosse, which is also shared by the Chevy Malibu and Impala. They should once again be available with front- or all-wheel drive and a choice of turbocharged four-cylinder engines. Rumor has the Opel versions debuting at the Geneva show March, and the Buick would likely follow, possibly in New York in April.And then there’s the wagon. All signs point to Buick finally bringing the most practical Insignia to our market as a Regal. We got wind of a focus group testing the idea, Buick has trademarked the name Regal Tour X. That version would likely go up against the Audi Allroad in the classy, slightly lifted all-wheel-drive wagon category, basically acting as an almost-crossover for people who want a wagon but won’t admit it to themselves.

The Insignia wagon caught here is also an OPC, and we think it looks even more handsome than the hatch-sedan shown above. The trim piece stretching from the base of the A-pillar all the way up and back down to the tail is a nice touch in profile view, although we’re not so sure about how it terminates abruptly at the taillight. Maybe it will look better in person, and we’re not going to argue with another wagon joining this market.

Oh, and you may notice that the Insignia was caught in the US – the traffic signs and other cars on the road are a giveaway. So what is a model that isn’t sold here with those badges doing here with those badges? It’s likely being filmed for a commercial or photographed for ads, possibly both. They have a lot of cameras in California, and a lot of the time it’s easier to bring the car to them.