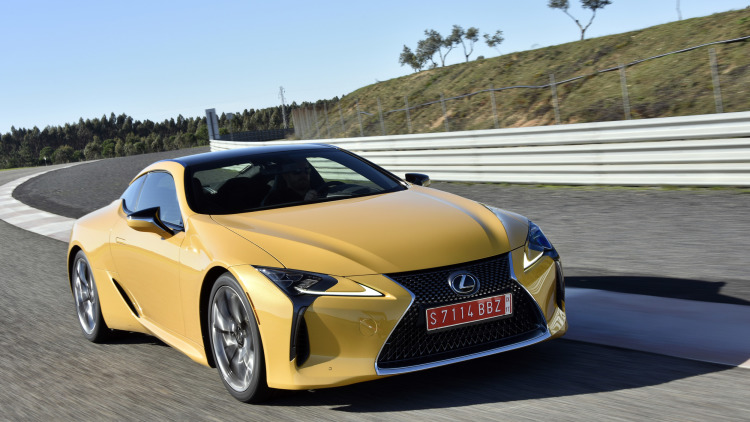 This is it, the headliner, the main event. After years of Lexus promising to make less-boring cars and instead giving us countless spindle-grille facelifts, the 2018 LC 500 is here as the brand’s new North Star. It’s the official halo to mark where Toyota’s luxury brand is headed. This is the car that we hope can bring an end to the relentless mentions of boring cars – which are themselves needlessly boring.

And besides, “not boring” is a terrible metric for evaluation. What Lexus is really trying to do is give its cars some spirit, to transcend the paint-by-numbers stereotype that made this brand the luxury juggernaut it is today. By that yardstick, the LC 500 is a success simply based on how it looks.

It’s beautiful in a way that we couldn’t predict from the 2012 LF-LC concept that foreshadowed it. The kind of beauty where instead of reflexively grabbing your phone to take a picture, you just stand there and keep looking. And pictures don’t do this car justice, anyway. They soften the edges and reduce the massive draw of the wide shoulders. In person, looking straight at the LC, the car looks like it’s 80 percent hood. In the rest of the lineup, the trademark Lexus grille’s execution ranges from caricature (RC) to botched nose job (LX). Here it pulls everything together. From every other angle, the LC has some feature that seems excessive – in the best way possible.

None of the performance-related options on the LC 500 change the suspension setup or the engine power. Available stuff includes a limited-slip differential, 21-inch wheels with aggressive summer tires, variable-ratio steering with rear-wheel steering, a carbon-fiber roof, and a spoiler that extends from the trunk lid. Lexus is still working on the specific packages and options ahead of the May 2017 on-sale date. The test car we drove had the variable steering, which we can praise for the fact that we didn’t notice it was there. Still, we doubt much is lost in the experience without this feature.

The rest of the purchase specifics are just as murky. Lexus will only commit to a starting price under a hundred grand, and we believe a fully loaded LC 500 will top out around $120,000. Only about 400 units are expected to come to the United States a month, or an annual rate of 4,800 cars. Lexus says about 85 percent of those will be V8s, the rest will be LC 500h hybrids.

At such low volume, the LC isn’t going to redefine Lexus the way the original LS shocked the automotive world. But this car is hugely significant for another reason: It shows that Lexus can create an object of irrational desire. To put it another way, this is a car you want, not a car you need. And we lust after the LC 500. Not because it checks all the boxes, but because it’s more than the sum of its specifications. It does most everything well, it has some flaws, but more than anything it has character. Welcome to the new Lexus.