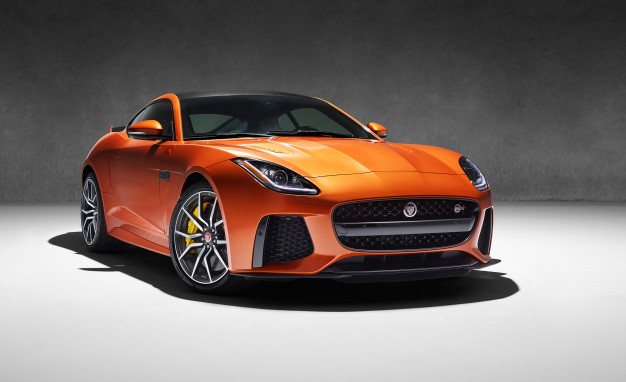 I’ve been kicked out of my car. I’m no longer rocketing through the Spanish high country in a Jaguar F-Type SVR. Instead, I’m kicking a stone down a lonesome road, playing poor-man’s soccer. A colleague said he wanted to take solo photos of the car, but I suspect he just wanted extra seat time in the Jag.

A blackbird wheels around a high bluff above, and a castellated village shimmers atop a hill in the distance, but otherwise all is still. Like, 16th-century still.

And then an announcement shears through the air like the archangel Gabriel and his horn trumpeting the arrival of Judgment Day. The sound bounces off rock walls and crashes down canyons.

The SVR is on its way back.

If, somehow, the 550-hp F-Type R is too measured, too quiet for your tastes, the first series production Jaguar from Special Vehicle Operations is louder-far louder-and even less subtle. The coupe and convertible both make 575 hp from a supercharged 5.0-liter V-8. The coupe has a $126,945 base price, a $20,550 premium over the R.

The SVR gets extra aero bits, including a flat underbody and an active rear spoiler, allowing for a claimed top speed of 200 mph. Opt for carbon-ceramic brakes and carbon-fiber packages and the SVR is 110 pounds lighter than the R.

And yes, it’s louder, a real feat considering the R’s psychedelic howl. The SVR surfs along a wave of omnipresent sound, the result of a new, lightweight, four-pipe exhaust constructed of titanium and an alloy called Inconel. There are race cars with straight pipes that are less intrusive. You couldn’t get it within five miles of Mazda Raceway Laguna Seca and its draconian noise restrictions.

Chuck most of that aside, however, because the changes that matter are less obvious. The SVR was a chance for Jag engineers to rectify issues with the F-Type R, namely its punitively harsh ride and maddening understeer. The R is a binary car: Feel free to brake, turn, or accelerate, but don’t try to blend any of those operations.

“The target was to improve turn-in performance and take out understeer, allowing you to manipulate the car with the throttle, rather than just staying off of it,” says Jaguar vehicle dynamics specialist David Pook. He says the front anti-roll bar was softened and the rear, stiffened. New shocks and lighter wheels were fitted. The all-wheel-drive system was also reworked to reduce the amount of torque going to the front wheels. The SVR gets wider tires than the R, 265/35 front, 305/20 rear, specially formulated by Pirelli. “We’ve moved the balance rearward, making the rear tires work harder,” Pook says. Between the chassis tweaks and new rubber, the team also coaxed out extra comfort. The ride is smoother. “You need to be able to access the huge performance. But it also needs to be safe and confident, and you should be able to drive it to the shops.”

The proof of those changes is found on the Spanish back roads. I shove aside my colleague, drop into the driver’s seat, and pummel down narrow, jagged lanes best suited to a Porsche Cayman. The front of the car no longer feels like it’s taken a hit of novocaine, the Pirelli P Zeros tucking it into corners far more willingly than the R. You can balance the car with the throttle and accelerate out of corners earlier. Still, given its weight (3800 pounds) and love of straight-line speed, the SVR is just this side of a muscle car.

In the end, the balance and suspension adjustments are the most welcome changes, although the little bit of extra sound never hurts either.

Previous post Is Mercedes-Benz The Most Innovative Auto Brand?