This Self-Driving Car Smiles At Pedestrians 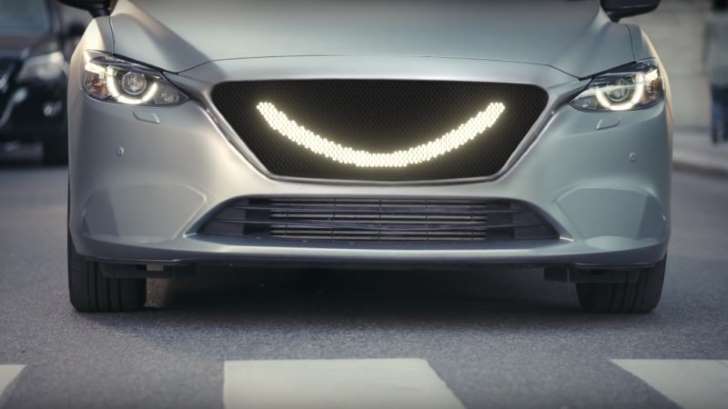 As autonomous vehicle development continues in the name of safety and efficiency, not everyone is on board with the idea of two-ton, rolling robots sharing the same space with humans. Pedestrians, especially, want to know that they are safe from driverless cars that could be involving them in life-or-death decisions. At least with a human driver, one can have their presence acknowledged with a wave or a nod before crossing the road in front of a car.

The thing is, autonomous cars do (ideally and in most cases) recognize pedestrians. In order to provide some reassurance, Semcon has developed an autonomous car concept that gives pedestrians a smile to let them know it’s safe to cross the street.

It’s sort of a first stab at creating a larger communication standard for self-driving vehicles. Much like today’s cars use brake lights and turn signals to communicate with other humans on the road, Semcon says that “a common language for how self-driving cars will interact with humans is now needed.” In this case, the first step happens to be a display in the car’s grille flashing the universally recognized smile to warmly communicate that the autonomous system sees the pedestrians and is waiting for them to proceed.

Semcon notes that the majority of pedestrians seek eye contact with drivers before crossing a busy street. And as another video from Semcon shows, humans react with fear (understandably) and even hostility to driverless cars at intersections. So, even though there might not be a human in charge of the vehicle, the solutions to the challenges autonomous cars pose should be based on human behavior, according to Semcon. The Smiling Car is the company’s first step in that direction as it works with the research institute Viktoria Swedish ICT to develop a global standard for vehicle-to-human communication.

Semcon isn’t the first to demonstrate a communication system for self-driving cars. Just last month, autonomous startup Drive.ai showed its own text- and emoji-based system to communicate with humans outside of the vehicle. It may not be as personal as Semcon’s smile, but it’s perhaps a little more robust.

Next post Reasons to Switch to Better Mercedes Wheels