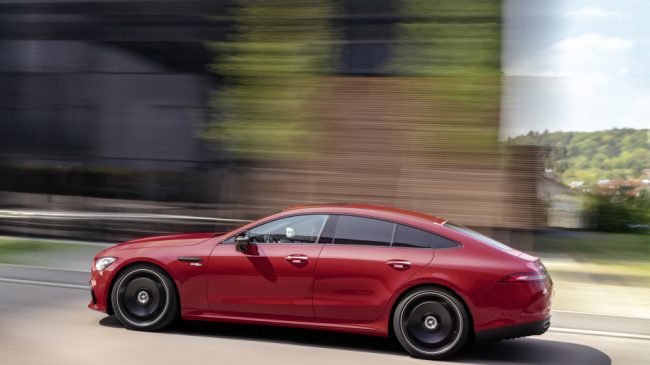 The new Mercedes-AMG GT 4-Door Coupe debuted with an obscene amount of horsepower available at the top-level GT 63 S. That car makes 630 horsepower and 627 pound-feet of torque from AMG’s 4.0-liter twin-turbo V8. Now, Mercedes-AMG is taking us in the opposite direction with this slick-looking AMG GT 43.

This “43” model will slot in below the GT 53 and pack a similar 3.0-liter turbocharged inline-six engine, albeit with less power. You’ll be dealing with 367 horsepower and 369 pound-feet of torque here – 68 hp and 15 lb-ft less than the GT 53, respectively. As of now, there’s no word on whether this less-powerful variant will make it stateside.

It might have fewer ponies, but Mercedes still loaded it with the same cool tech as the more expensive GT 53. The 48-volt electric system is standard and it still uses Mercedes’ EQ Boost tech that helps deliver an extra 22 hp for brief periods. Its electric-compressor-enhanced turbocharger promises to eliminate some of that pesky turbo lag as well. Transmission-wise it’s using the same AMG nine-speed automatic with torque converter, and it sends that power to a rear-biased all-wheel-drive system. The AMG GT 43 will hit 60 in a hair under 5 seconds on its way to a top speed of 168 mph.

Pricing for the AMG GT 43 in Europe equates to $111,375 here. That’s expensive, but the GT 53’s equivalent price is a good $16,000 more. Again, availability here in the States is still unknown, but we’ll let you know if Mercedes decides to bring it across the pond.

Next post 2019 Ram Rebel 12 Is Luxurious Off-Road Truck Named For ... Its Touchscreen