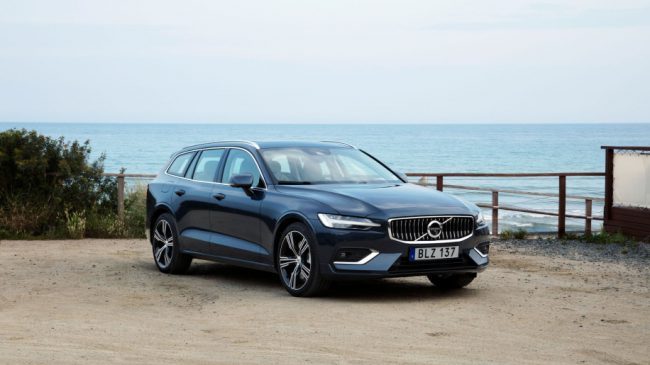 Volvo’s all-new V60 mid-size wagon will join an exclusive coterie of American wagons. While wagons made up less than 1 percent of total American vehicle sales last year, sales in the wagon category were up almost 20 percent, and are expected to rise further this year with new entries from Buick, Jaguar, and Porsche.

Volvo’s unique situation – the only automaker to offer two different sizes of wagon in the U.S. – makes us think of blackjack. When a player is dealt two cards with the same rank, they are allowed to split the cards into two hands, doubling their bet. In most cases, splitting either diminishes a winning hand or multiplies by two the horror of a crappy one.

The V60 has much in common with its big brother. It rides on the same Scalable Product Architecture platform, it sports the same inviting-yet-minimal Scandinavian interior, and it hosts the same 8-speed transmission and twin-charged (turbocharged and supercharged) 316 horsepower T6 motor and all-wheel-drive system. A 250 hp turbocharged T5 front-driver will also be available at launch, and a 400-hp plug-in hybrid will follow.

Maybe it doesn’t matter. No one is ever going to track a V60, or even pound it through winding foothill vineyard roads like we did. What people will, and should, do is sit in this thing for a long stretch and take a road trip.

Momentum is probably the wise move anyway, from a value perspective. (Pricing on the V60 has not yet been announced. We expect it to be a few grand more than the $38,250 base price of the outgoing, and ancient, V60.) While it doesn’t come standard with some trick features like the redundant LCD nav screen between the speedo and tach, the Harmon Kardon stereo, or some of the aforementioned safety systems, it does have a panoramic sunroof, a power liftgate, heated front seats, adaptive cruise, and the big 9-inch vertical tablet infotainment screen in the center console.

In fact, the V60 is so good, and so good looking, that it almost makes us question our eternal affection for the V90. Given that many wagon buyers fit into the rich-but-reserved psychographic known as “stealth wealth,” we suppose there will always be a subgroup who want the bigger, more expensive one.