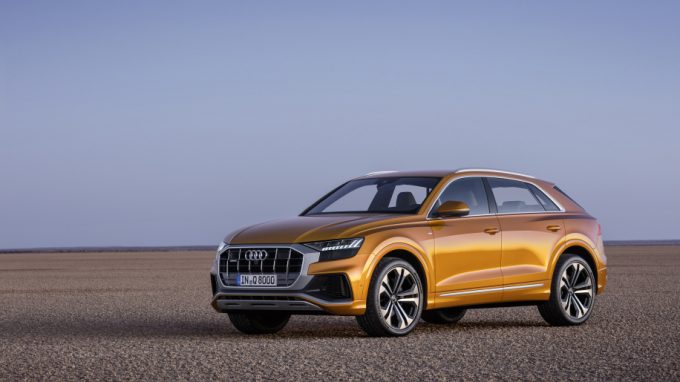 During the spring, Audi has repeatedly teased the new Q8’s shape in sketch form, or in near-total darkness. The luxury SUV has also been spied wearing light camouflage, on the street and on the Nürburgring. Today, the official reveal takes place in Shenzen, China, and Audi has released these official images of the vehicle.

A high-riding sibling to the A8 sedan, the rakish-roofed Q8 wears a more aggressive design than the Q7 SUV. At about 16 feet, 4 inches long, about 79 inches wide and about 67 inches tall, it’s shorter, wider and lower than the Q7. Out of the total length, about 118 inches are dedicated to the wheelbase, giving the vehicle short overhangs, a look that is exaggerated by the 22-inch wheels.

There’s always quattro four-wheel-drive, 40/60 rear-biased as standard. The ground clearance can be adjusted all the way to 10 inches, and adaptive air suspension is optional. The system adjusts the ride height depending on the driving situation, with a range of 3.5 inches between highest and lowest setting. All-wheel steering is also optional, turning the rear wheels up to 5 degrees.

The Q8 employs a 48-volt mild hybrid setup as a top powertrain version, consisting of a lithium ion battery and a belt alternator starter paired with a gasoline engine. It can recover as much as 12kW of power during braking, and it allows for long coasting with the engine shut. Speaking of engines, V6 and V8 diesels still form a large portion of the Q8’s power portfolio, depending on the market. European sales of the Q8 will start at the third quarter of 2018, with other markets and their engine choices announced later.

Previous post Funding your first car – Just how easy is it?