The New Porsche 911 Speedster Concept Is Basically A GT3 Convertible 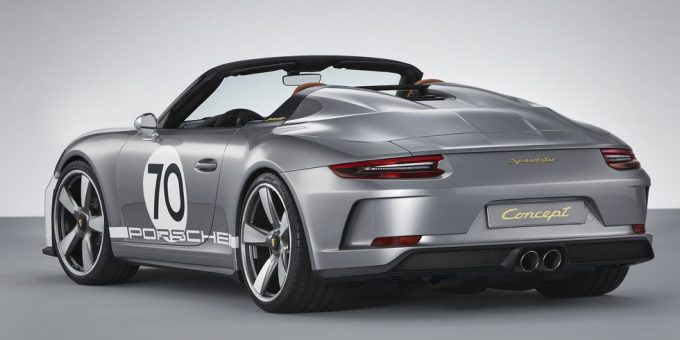 Today, Porsche is celebrating the 70th anniversary of its first car, 356 #01, becoming road legal with a special 991. The 911 Speedster you see here is basically a GT3 with a cut-down windscreen and no roof, paying tribute to that first Porsche and the ultra-cool 356 Speedsters of the 1950s and 1960s. It’s just a concept, but we have a feeling Porsche will put this 911 Speedster into (limited) production.

Porsche often likes to build limited-edition Speedsters as final hurrah for a specific generation of 911. In 1988, the first 911 Speedster was created to send off the old G-Body as the then-new 964 made its debut, and in 1994, Porsche brought the Speedster back just as the 993 was starting production. Only two 993 Speedsters were built—one for Ferdinand Alexander Porsche, one for Jerry Seinfeld—and no 996 Speedster is known to exist.

Porsche brought the 911 Speedster back for 2011, just as production of the 997 was winding down, building 356 examples in total. We don’t know when the next-generation of 911, the 992, will arrive, but it should be sooner than later, so it’s high time for a new Speedster.

History lesson over, let’s talk about this car. Its 500-hp, 4.0-liter naturally aspirated flat-six is lifted straight out of the current 911 GT3, as is its six-speed manual gearbox. It’s one of the best engine-and-gearbox combos available in any car on sale today. The chassis is lifted straight from the GT3 as well, and its development was handled by Porsche Motorsport in Weissach.

The body of this Speedster concept comes from the Carrera 4 Cabriolet, though its windscreen is significantly shorter and more steeply raked. The side windows are commensurately smaller too. To save weight, carbon-fiber reinforced polymers are used for the front hood and the bespoke rear decklid, and inside, there are carbon bucket seats, with no radio or A/C system to be found.

The 997 Speedster had a manually operated folding roof, but in old-school sports-car tradition, this one doesn’t. Instead, you get a clip-in tonneau cover to keep the interior (mostly) water-free.

There are all sorts of other old-school touches found throughout, too. The 21-inch center-locking wheels are made to look like old Fuchs Alloys, while the mirrors are designed to evoke 1960s sports cars. This two-tone paint scheme of GT Silver and White also harks back to old Porsche racing cars. We really dig the fuel-filler in the center of hood too.

If this car does make production, it’ll likely be built in small numbers, and it won’t be cheap. The 911 Speedster has always been a collector’s special.