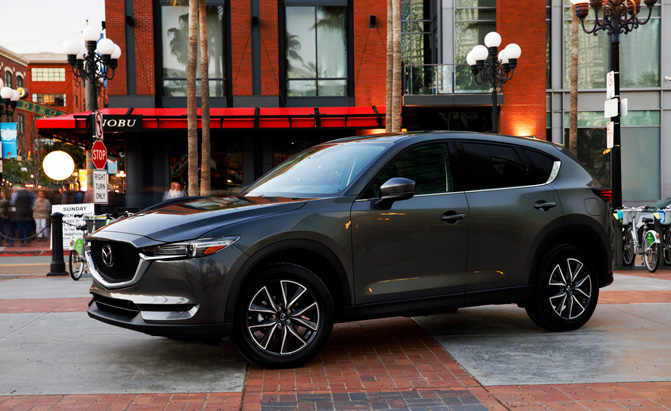 Just nine months after a complete redesign, Mazda’s small crossover receives some additional updates. The biggest change coming to the 2018 Mazda CX-5 is cylinder deactivation technology that comes standard on all models.

An official list of fuel economy numbers hasn’t been released. But Mazda told us they’re about 1 mpg higher for city and highway across the board. For reference, the 2017 CX-5 achieves 24/31 mpg city/highway with front-wheel drive and 23/29 mpg with all-wheel drive.

At cruising speeds, the engine shuts off two of its four cylinders to increase efficiency. While it’s a common feature overall, Mazda says it’s the only automaker in North America to employ cylinder deactivation on a four-cylinder. The updated Mazda6 also receives this technology.

Like before, the CX-5 comes equipped with a 2.5-liter four-cylinder engine good for 187 hp. Mazda has made small updates to reduce internal friction on this unit. It still comes paired to a six-speed automatic.

The crossover adds a good selection of new standard features on the base model. These include a leather-wrapped steering wheel, leather-wrapped shifter, and blind spot monitoring with rear cross traffic alert. Previously, these features were available on the mid-level Touring trim and above.

Touring models start at $27,190 (up from $26,855). New features on this trim include 19-inch alloy wheels and the full suite of i-ACTIVSENSE technologies. Grand Touring models, which receive two-position memory driver seat and six-way power adjustable passenger seat, cost at least $30,620 (up from $30,335). All-wheel drive is available on any trim for an extra $1,300.