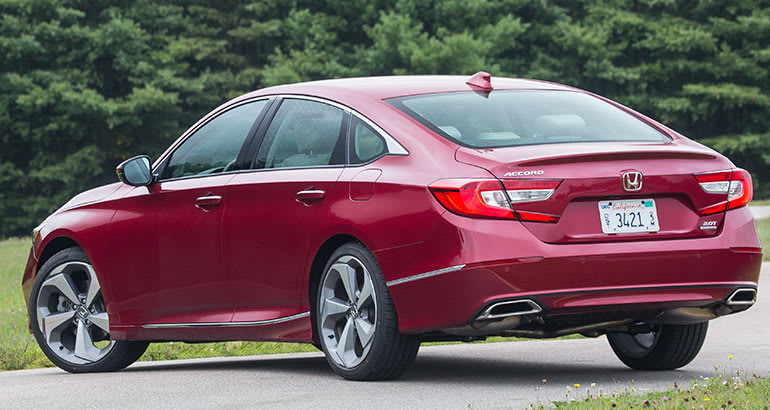 So much for the so-called “entry luxury” sedan market. All those lightly-gingerbreaded four-doors selling in the forty-to-fifty-thousand-dollar range, with their oh-so-ambitious advertising and their mild dustings of gee-whiz tech and their touching little pretensions to upscale credibility, are now just as dead as Julius Caesar or Napoleon or Charles Manson courtesy of the new Accord Touring.

It was inevitable that this would happen. The past decade has seen a sharp decline in the specialness, for lack of a better word, available in that segment. Relentlessly pressured by technological advances in mass-market sedans even as European emissions-consciousness and fuel-economy concerns have seen their bespoke drivetrains ditched in favor of clattering direct-injection turbo four-bangers, the class that was once defined by the BMW 3-Series on the sporty side and the Lexus ES on the posh end now finds itself rendered completely irrelevant by Honda’s decision to fit the tenth generation of its big sedan with pretty much every piece of equipment you’d expect on a $55,000 loaded-for-lease-residuals kinda-sorta luxury car.

The early press on the new Accord has mostly focused on the Accord’s “return to the top” in the family-sedan segment but that’s what they call “fake news” nowadays. The outgoing model was still best in class by a big margin and would have remained so for the entire current product cycle. In fact, much of what you notice about the new car appears to be driven less by a desire to make the car better and more by a conscious alignment of the Accord with its perceived competitors, both in its own segment and the one directly above.

Compared to the old car, the new one is a bit smaller on the outside. It’s also quite a bit lighter in most trim and powertrain configurations. Honda claims that it’s more spacious inside but that depends on where you sit. The front half of the cabin is actually a bit tighter, based on a side-by-side comparison with my 2014 EX-L V6 coupe, and that’s particularly true for the area typically occupied by the driver’s right knee. Not everybody who fit comfortably in the old car will do so in the new.

The story is different in the back seat, where passengers now have an embarrassment of legroom compared both the eighth- and ninth-generation sedans. In some markets this is considered a chauffeur-grade automobile and it’s now significantly more suited to the task. Unfortunately for the professional drivers out there, access to the trunk isn’t nearly as good as it was before, a casualty of the new fastback body style that aimed for “Audi A5” but missed and hit “Chevy Malibu” instead.

As you’d expect from a transmission that doesn’t achieve direct drive until sixth gear, the 10-speed is always shifting. Yet it’s remarkably civilized in regular use and seems to have outstanding ability to predict a variety of driving styles. In full kickdown situations, there’s a noticeable pause while the gear ratios figure themselves out, but in truth you need to be deliberately misbehaving for such a situation to occur. Half-throttle is enough to motivate this sedan into even the smallest possible traffic gaps, and it is noticeably less likely to spin the front wheels while doing so compared to its illustrious six-pot predecessor.

The days of the Accord’s supremacy over all enemies both foreign and domestic, however, are far from over. At $35,800, the Touring 2.0T represents something of a bargain for entry-luxury intenders who can steel themselves to deal with the sidewalk drama and high-pressure sales tactics of their local Honda dealers. No car has been as consistently good as the Accord over the past four decades, and for drivers who do not absolutely require the Sturm und Drang of the old V-6 this is the best Accord, and the best family sedan, ever built.