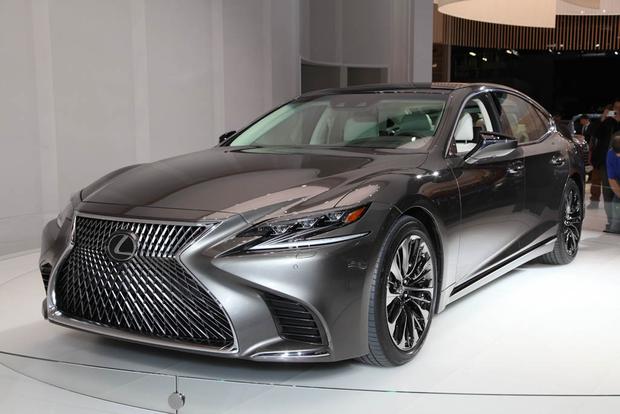 Lexus’s latest flagship sedan comes in LS500 and LS500h forms, the former of which is powered by a twin-turbo 3.5-liter V-6 while the latter uses a hybrid drivetrain incorporating a naturally aspirated 3.5-liter V-6.

Not only is the Lexus less expensive than its European competition, it also comes better equipped, with even the base rear-wheel-drive LS500 coming standard with a full suite of active safety features that cost thousands extra on the S-class and 7-series. Lexus’s only real competition in the “budget-priced” flagship-sedan realm is the Genesis G90, which starts at an even lower $69,325 and includes plenty of standard equipment of its own.

All-wheel drive is a $3220 option on both the LS500 and the $80,505 LS500h hybrid, and several packages are available that can drive the sedans’ price above the six-figure mark. The LS500 F Sport that adds a performance-oriented wheel-and-tire package, larger brakes, sharper chassis tuning, and plenty of visual aggression inside and out, costs $81,995. A $9700 F Sport performance package turns up the sportiness a notch higher with active anti-roll bars, rear-wheel steering, and a variable-ratio steering rack.

For those interested more in the luxury side of the spectrum, numerous interior upgrades are offered for non–F Sport models. The lowest level is the $3730 Interior Upgrade package with nicer leather, 28-way front seats with massage, and heated rear seats; one step up is the Luxury package ($12,250–$12,290) with the above features plus four-zone automatic climate control and power reclining rear seats with heating, ventilation, and massage functions. The top-dog Executive package offers even more adjustability for the front and rear seats for between $17,080 and $17,100, while an extra $6000 on top of that adds exclusive Kiriko glass interior trim.