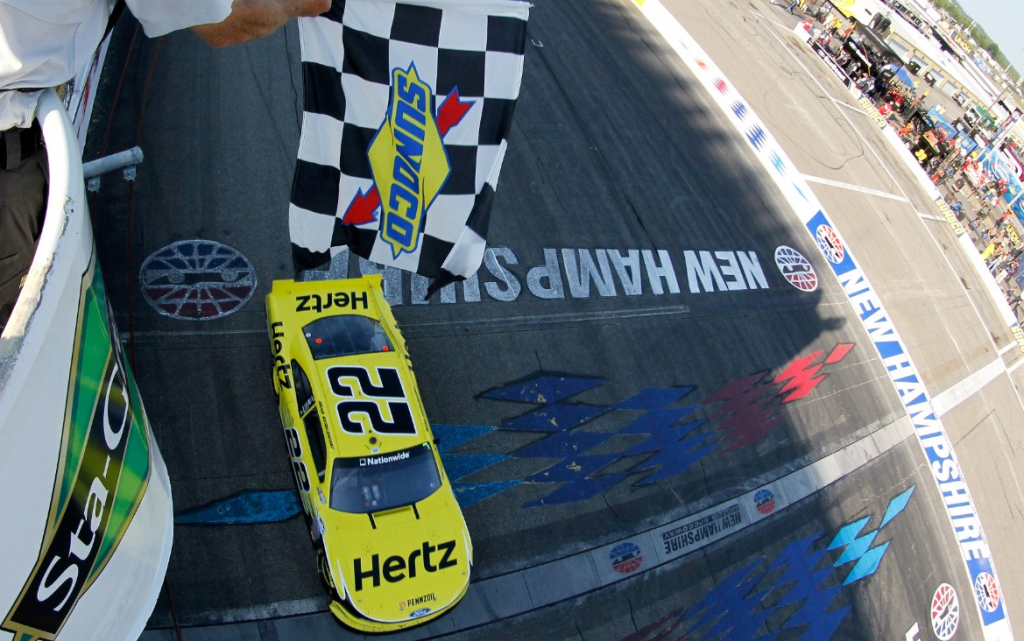 “This is really satisfying. This team has deserved to win a few races and things just haven’t quite gone their way and it is nice to put it together here at Loudon with a strong car and great team. Loudon is one of my favorite places to go race. That is why I am running the Nationwide race here. I really enjoy being out here. I want to thank the fans for coming out and we hope to see you tomorrow and hopefully we can do the same thing.”

DID YOU GET NERVOUS AT ALL WITH THE LAP TRAFFIC TOWARD THE END OF THE RACE? “Yeah a little. Lap traffic is always difficult here at Loudon but I give credit to the field. They helped me out and gave me a few breaks. That is part of the fun.”

THIS IS THE SEVENTH STRAIGHT YEAR YOU’VE HAD AT LEAST TWO NATIONWIDE SERIES WINS. NEVER GETS OLD DOES IT?“No, I enjoy this series and feel lucky I am allowed to compete in it.”

RYAN REED, No. 16 ADA Drive to Stop Diabetes Ford Mustang – FINISHED 11th
“We ran in the top-10 most of the day. I hate that the balance went away from us at the end. We took two tires and it hurt us. We were fighting for track position all day out there. We definitely had a fast Ford Mustang. I think coming into Daytona last week we decided that was going to be the reset button and the first half of the year was about learning and now we were going to go racing. If we keep doing that we will be in good shape.”

TALK ABOUT YOUR BATTLE WITH REGAN SMITH FOR THE DASH FOR CASH TODAY. “yeah, I gave him too much room through one and two on that last restart and he got me really loose up top. The seams – the second seam was really loose and I got in the second seam and it hurt us really bad. I hate that we didn’t give him more of a battle there but like I say I am proud of my guys and how far we have come this year.”

CHRIS BUESCHER, No. 60 Ford EcoBoost Mustang – “That was pretty awesome for us. I am excited. Our Ford EcoBoost Mustang was relly good today. It was good all weekend. We knew we had a good piece under us it was just a matter of track position. Our guys on the box made a great call, Scott Graves and Mike, a call that was very questionable to a lot of people but we were able to pull it off which was awesome and we got a lot of track position we didn’t have early as well as making the car better to maintain that. It is a really good day for us and proud of our guys. Hopefully we can go into Chicagoland and put up a fight for Regan for the Dash for Cash.”

WHAT WILL IT BE LIKE TO RUN FOR THE CASH NEXT WEEKEND? “It is definitely a cool opportunity, I gotta thank Nationwide Insurance for doing that and stepping up every year. It is something I have never been able to participate in and it should be a lot of fun. It should just be a matter of going out there and being consistent and making sure we get some speed in our car at Chicagoland.”

AT ANY POINT WERE YOU NERVOUS ABOUT THAT PIT STRATEGY CALL? “Yeah, I guess the fact that we were on older tires was definitely concerning and knowing that everybody behind us had been fast all day. It was a very risky move that worked out really well. We lost a couple of those spots pretty quick but were able to hold on and maintain and actually picked up some speed being in better air and finding some other things with the car during our last adjustment. It is always a little nervewracking but also a lot of fun.”

BRAD KESELOWSKI, No. 22 Hertz Ford Mustang – A BIG WIN TODAY OUT THERE AND A LOT OF STATS, INCLUDING GOING FROM THE POLE TO WINNING THE RACE. “What a hell of a Saturday. I am going to need a little time to soak it in. it has been a really busy day and sometimes on these really busy days you get so caught up in the action that you really can’t appreciate all that has transpired. Hearing you say all that is really cool. Thank you for sharing those things. The Cup car was fast this morning, the Nationwide car in qualifying we had a lot of adversity and fought through that and got the pole which was very rewarding today in the Nationwide race. The car was really fast at the beginning and it seemed we leveled off to Kyle the last run. I thought he might have been a little faster than we were but it was all about getting through lap traffic which was a big of a dogfight and personally that may not have looked it on TV but it was one of the most challenging races I have ever ran. Knowing you have Kyle Bush behind you and he is a tiny bit faster and you have to fight through lap cars and there was always something coming at us. We dodged a lot of bullets there today between qualifying and the end of the race and I think it is showing the strength of the 22 Team Penske Nationwide team. There is so much to be proud of there and I am obviously looking forward to tomorrow and the tremendous opportunity we have. The Cup cars are running so strong right now. We didn’t get the qualifying effort we wanted form the Cup level but the performance has been there in every other category. We just need to execute and keep that going. I think we can do it. I am very optimistic and very pleased with how the weekend is going so far. I want to keep the momentum up. Like you said, on Tuesday we are having a little fun and doing some TV Land stuff with Sullivan and Son, which is a TV show I have a recurring role on I guess you would say. That should be fun on TBS. Life is good. Thank you Kristi for sharing that stuff, it is good to soak it in.”

JEREMY BULLINS, crew chief, No. 22 Hertz Ford Mustang – TALK ABOUT YOUR STRATEGY TO PUT BRAD UP FRONT FOR THE POLE AND ALSO THE RACE. “Well, this race is so short just being 200 laps that track psotion is huge and having the first pit stall is huge. We felt like we felt the pole on the table the first run and opted to go back out and give it another shot and got it. We made a couple adjustments and make the car better for him and gave him another opportunity there and I think that paid dividends in the race. It kept us up front and able to start up there a little closer to the front. Fortunately I was happy that the first run went green as long as it did because it makes the strategy easier to put four tires on there. The biggest thing was we felt we were racing the 54 and we all pitted around lap 80. Around lap 100 they lost a couple spots on a restart which put them in a position where it made perfect sense for them to pit. When they did that, it felt like it put us on defense the rest of the day because I felt they would take two tires, which forced us to take two tires. They had better left sides than us and more speed at the end but Brad did a really nice job of getting through traffic and holding on to what we had there.”

BRAD KESELOWSKI CONTINUED … YOU WERE IN TOTAL CONTROL EXCEPT YOU DROPPED THE FLAG ON THE VICTORY LAP. HOW DID THAT HAPPEN? “It was really windy and my hand has been really sore so I couldn’t really hold the steering wheel and I took my hand off the flag for a  second and the wind just ripped it right out. It is not one of my prouder moments.”

DID YOU LEARN ANYTHING FOR TOMORROW’S RACE? “Yeah, I thought it was interesting that it looked like the modified’s did a little damage to the track which should be kind of a story point for the rest of the weekend. We will have to see how that plays out. Other than that, you are always learning stuff.”

HOW IS YOUR HAND? “It is better but not perfect but we will get there.”

IT WAS A CAT AND MOUSE GAME IN THE END BETWEEN YOU AND KYLE. HE SAID HE DIDN’T THINK HE COULD CATCH YOU. WERE YOU GETTING NERVOUS SEEING THE 54 GETTING CLOSER BEFORE THAT FINAL MISTAKE? “I didn’t see if he made a mistake or not but I definitely thought he was a little faster than we were. We had track position on him which is a credit to Jeremy and the guys and how they executed. And like he said about Kyle pitting and all those other things. That is the cat and mouse game and what makes racing so much fun.”

WHAT DO YOU MEAN ABOUT DAMAGE TO THE RACE TRACK? “There is a sealer that is put in between the cracks that holds the track together and it looked to me like today that all got ripped out of the track, which exposes the cracks and leaves them very vulnerable to peeling up chunks of asphalt and with the Cup cars running the speeds they do with the downforce levels they have and grip they have in general, with those being exposed there is a high potential to pull a chunk out of the track like we have seen at Dover and Daytona and other places. Hopefully that will get addressed before tomorrow or if not it won’t become a problem but eventually it will. It could be a storyline. That is one of the biggest things I saw.”

JEREMY BULLINS CONTINUED … HOW MUCH DO EITHER OF YOU THINK WHEN YOU ARE ABOUT TO GO ON THE RACE TRACK ABOUT POINTS, OWNER POINTS, ETC.? “There are points for every spot so you have to race everybody. Certainly the 54 and 22 the last couple years have separated themselves in owner points from the other teams and obviously we know they are the ones we have to beat. Every spot is a point so you race everybody as hard as you can. I feel like this year, I got a lot of questions about why we don’t have wins but I think our cars have been better. We’ve been up front, qualified better and average finish is better but everything has to go perfect to get the win. Today we executed and got a perfect driver rating and everything worked out. That is how it goes.”