Eco.Logic Motion developed by Bosch now also provides Daimler’s Setra TopClass 500 coach with fundamental benefits through lower fuel costs and reduced pollutant emissions. “The focus is on optimized engine and transmission control through the use of extended navigation data, such as information about road gradients,” explains Manfred Baden, President of the Car Multimedia division at Bosch.

Bosch’s Car Multimedia division and Mercedes-Benz Trucks jointly realized the first series production project incorporating Eco.Logic Motion. The system in the Actros that Daimler refers to as “Predictive Powertrain Control” was already introduced in the late summer of 2012. Bosch supplies the hardware, software platform and electronic horizon for this, and Daimler developed the sophisticated algorithms. This cutting-edge technology is now also optionally available in the Setra TopClass 500 coach. It will soon also be making an efficient contribution to resource conservation in further Setra coaches and in the Mercedes Travego, thus quickly paying for itself.

Eco.Logic Motion acts, so to speak, as a predictive sensor for improving the driving strategy. Through strict separation of the operating software and application software, the hardware developed by Bosch is capable of also taking into account vehicle-specific algorithms and improving the energy efficiency.

The system creates a three-dimensional image of the surroundings based on a digital map that also includes information about the slope of the road. This image combined with precise data about the vehicle’s location obtained via GPS (Global Positioning System) is used to calculate a preview of the vehicle’s surroundings – referred to as the “electronic horizon”.

Based on the information gleaned from the dynamic electronic horizon and from the comparison with current vehicle parameters, the application software simulates an environmentally friendly driving strategy. For this purpose, it calculates a suitable speed and an appropriate gear selection for the route section that lies ahead of the coach. This information is then compared with current parameters and is transmitted to the vehicle’s powertrain as instructions that are followed by the engine and transmission control units, thus enabling the vehicle, for instance, to accelerate when most appropriate or avoid unnecessary gear changes shortly before the crest of a hill.

New test drives performed by Daimler on the topographically demanding A6 autobahn have now revealed amazing potential. According to the findings, utilizing Eco.Logic Motion enables an average fuel saving of more than nine percent to be achieved. Accordingly, CO2 emissions can also be reduced significantly. According to calculations by Bosch, for a coach with a high annual mileage and at today’s fuel prices, even a reduction in fuel consumption of only one percentage point translates into a decrease in the overall operating costs of around 400 euros per year. 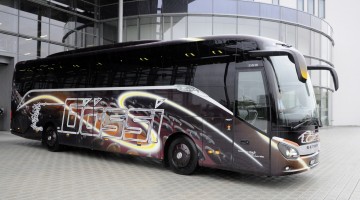