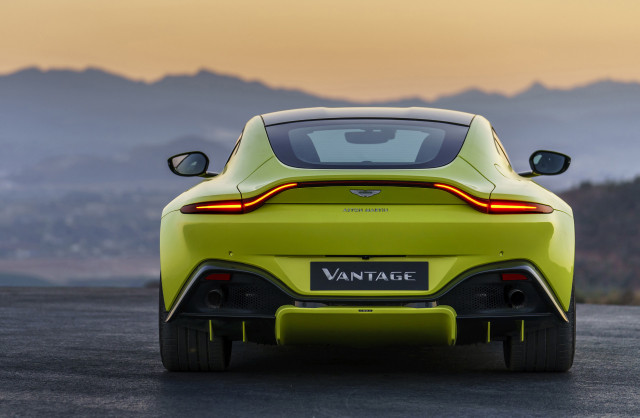 The public has spoken and the results are in: The new 2019 Aston Martin Vantage is gorgeous, incredible, amazing, sexy, inspiring, totally mega, and “What the &%#@?!”

We didn’t intend to conduct a poll on the Vantage; it just happened. Whenever we came to a stop-at gas stations, traffic lights, the drive-through dry cleaners, the parking lot at Whole Foods—people were drawn to the Vantage as if it possessed its own gravitational field. Strangers circled warily, as they might an alien spacecraft.

The Vantage Is a Car with a Past

The 2019 Vantage is everything Aston Martin’s history would lead you to expect from one of its new models; this is a company that has historically had to do a lot with a little. So, the Vantage is new but not quite all-new. Its chassis is a modified version of the Aston DB11’s. Its engine is supplied by Mercedes-AMG.

It steers into corners with aggressive precision; it’s easy to balance on the edge of adhesion; and it doles out power with authority-free of sudden, lurid tail slides, much like a well-developed race car. Its optional ($9995) carbon-ceramic brake rotors proved relentless, consistent, and fade free, hauling it down from 130 mph time and again without protest on GingerMan’s short back straight.

Speed Is Not the New Black

If only the Vantage were more accomplished at the mundane aspects of daily driving. The brakes that work so well on the track are extremely grabby on the street, making smooth stops all but impossible. Throttle response just off idle is hair-trigger quick, so you sometimes lurch away from stoplights. (Did those guys snapping cell-phone videos catch that uncool takeoff?) The interior is boomy at highway speeds, registering 77 decibels at 70 mph, so you have to crank up the sound system to enjoy your tunes.

When the Tire Smoke Settles, the Vantage Is at a Disadvantage

If a supercar’s sole purpose were to make passersby dream and drool, the Vantage would instantly be rated as one of the best. Doubly so our test car, in its phosphorescent yellow-green hue (Aston calls it Lime Essence).

For everyone who sees it on the street, however, and those who are compelled to possess it for its sheer beauty—and are lucky enough to have the means—those deficits will matter not a whit. In the court of public opinion, the Aston Martin Vantage is already everything a supercar should be.