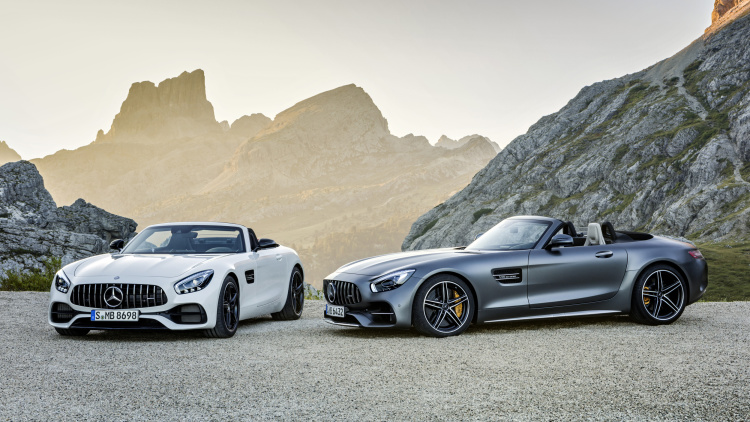 Last week, Mercedes-Benz announced that it would be accepting orders in Europe for the the new Mercedes-AMG GT and GT C roadsters, as well as the wild GT R coupe. Along with that announcement came pricing for the new models. Because the pricing is only in Euros, and American pricing is more than just converting Euros to dollars, we can’t say exactly how much they’ll cost here. However, we did find out from a Mercedes representative that the differences in pricing between the Euro variants will be similar to how they’ll be positioned in the US market. We also know that the exact pricing will differ because of how specific features are packaged for both markets. So let’s do some math.

The base GT roadster will start at €129,180, the high-performance GT C roadster will start at €160,650, and the ultimate GT R coupe will begin at €165,410. Comparing the European’s GT caoupe price with the roadster, there’s about an 11 percent increase for the drop-top. Applying that to the American GT coupe’s price tag of $111,200 before destination, we get a rough estimate of about $120,000 for the GT roadster. By comparing the GT C roadster and GT R pricing to that of the GT S coupe, the GT C comes with a price that is about 19 percent higher than that of the GT S, while the GT R packs a 22 percent premium. Applied to the US-market GT S price, the GT C roadster should come in at around $155,000 and the GT R coupe should cost roughly $160,000.

Again, these are just estimates, but close ones based on estimates from Mercedes itself. As for when we’ll hear about official pricing, it could be a while. The Mercedes representative told us that official US pricing and availability for the GT R won’t be available for a few months, and possibly not until spring for the roadsters. If we do hear anything more specific or official on pricing, we’ll be sure to update this post.