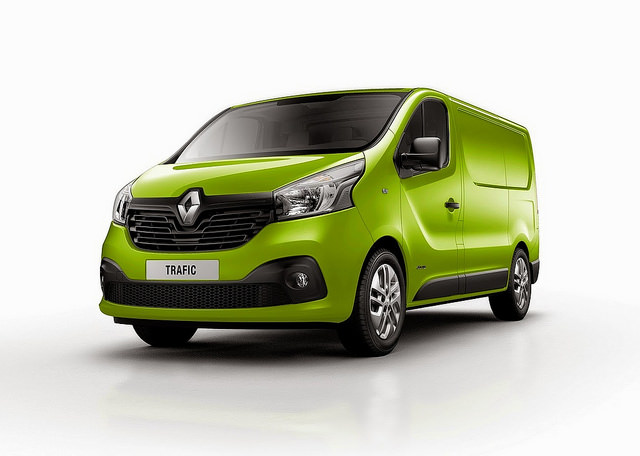 There are many commercial vehicles to choose from in 2015. But, did you know that the Renault Trafic has proven to be a firm favourite with van drivers?

It’s been in the market since 1998, and the eagle-eyed among you will have spotted it under different guises. The Vauxhall and Opel Vivaro and the Nissan Primastar are all based on the previous generation Trafic.

In a recent statement, Renault have stated that 2015 will be the year that the new third generation Trafic will get launched. Here are some of the reasons this new model will remain a firm favourite with van drivers like the previous two generations:

Renault says that the front end of the new Trafic van is “assertive.” Judging by the photo above, I agree with them! The reshaped headlights complement the large radiator grille. And the emphasised Renault badge in the middle.

Trafic fans will note that the windscreen is steeper than the previous generations. It offers a more distinct break from the rest of the front end. And it makes it easier for drivers to view the environment around them.

There’s no doubt that Renault wanted to create a memorable design for the new Trafic. They wanted to assert their brand in the commercial vehicle world. It looks like they have succeeded in that respect.

In the past, I looked at the previous models on the vanwisegroup.co.uk website. One main difference between the second generation and the new one is the colour choices. Renault have gone on record to say that customers can choose from ten different colours for their new Trafic van.

The colours comprise of three solid finishes and seven metallic ones. That’s two more colours than the ones offered on the previous generation.

These days it’s important for drivers to keep in contact with the office and their customers while they’re on the road. We all know that using a mobile phone while driving is illegal in many countries.

That’s why Renault has come up with the perfect solution to this problem for van drivers everywhere. All new Traffic models feature a plethora of infotainment systems. Even the basic model features Bluetooth connectivity for smartphones.

And thanks to the clever interior design, there’s an optional cradle available for your iPhone. Or whatever smartphone you use. The MEDIA NAV systems also offer extra features for smartphone users. For instance, voice commands enable drivers to make and receive calls without taking their eyes off the road. Or their hands off the wheel!

There are four new engines available to choose from with the third generation Renault Trafic. The dCi 90 and dCi 115 are available with or without start-stop technology. The Energy dCi 120 and 140 twin turbo units offer extra power for those that carry large loads often.

They are all diesel engines that comply with Euro 5 emissions legislation and Euro 6B too.

Previous post Give Your Windows, Wipers & Mirrors Some TLC With These Top Cleaning Tips