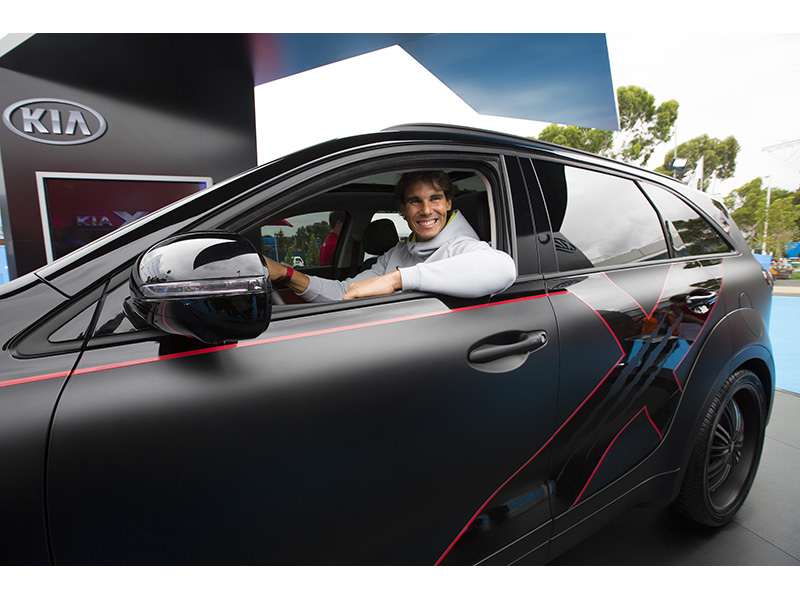 As the major sponsor of Australian Open 2015, Kia Motors handed over a fleet of 107 official tournament vehicles to Tennis Australia, the governing body for tennis in Australia, during a ceremony in Melbourne today attended by executives from Kia Motors Australia and Tennis Australia, as well as Kia’s global brand ambassador, Rafael Nadal. The Kia courtesy fleet will be driven by approximately 215 specially trained volunteer drivers who expect to clock more than 400,000 kilometers over thousands of journeys during Australian Open 2015.

Kia also held the world premiere of the ‘Kia X-Car’, a special X-Men-inspired all-new Kia Sorento, created in collaboration with Twentieth Century Fox Home Entertainment in support of X-Men Days of Future Past on Blu-ray, DVD and Digital HD. Kia’s ‘superhuman’ brand ambassador, Rafael Nadal, revealed the one-of-a-kind car. Kia has been actively engaging its social media fans to promote this latest showcar, inviting them to participate in a X-Men character guessing social campaign as well as releasing viral films related to the ‘Kia X-Car’. The latest video, ‘Making of Kia X-Car’ is can be viewed on Kia’s official corporate blog, Kia Buzz,

Following the handover of the Kia courtesy fleet to Tennis Australia’s CEO, Craig Tiley, Kia Motors Australia (KMAu) Chief Operating Officer, Damien Meredith, confirmed Kia’s ongoing support for tennis in Australia. “The Australian Open is the Kia brand’s longest running sports sponsorship program, and we are honored to be a proud supporter of one of the world’s greatest sporting events,” he said. “We are also very excited to unveil the ‘Kia X-Car’ here today as it showcases our commitment to delivering a more dynamic and exciting brand experience and products to our global audience.”

After accepting the courtesy fleet, Mr. Tiley said, “We are grateful to Kia Motors as the major sponsor for their unwavering support year in and year out. The Australian Open is undeniably the mostly anticipated sporting event in the world in January, and we at Tennis Australia are pleased to once again accept the fleet of Kia vehicles which will keep the tournament moving smoothly over the next few weeks.”

The majority of the 107-strong courtesy fleet – 70 vehicles – is made up of the Sorento SUV. Also comprising the fleet is Kia’s Carnival MPV (known as ‘Sedona’ in North America).

Previous post Protecting Your Classic Auto From the Ravages of Time