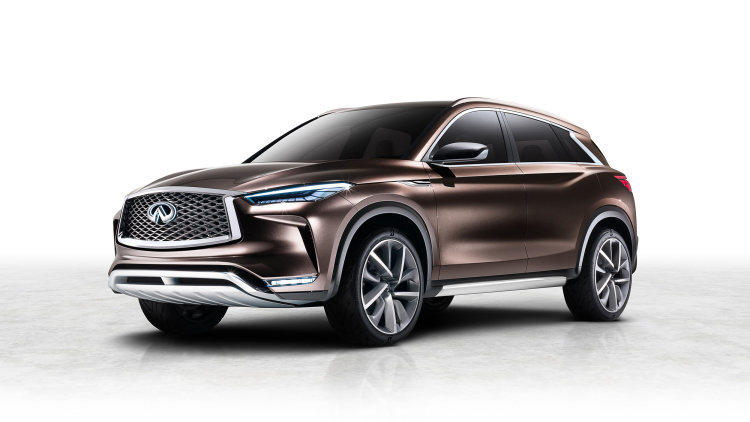 Infiniti revealed its QX50 concept ahead of its official debut at the Detroit Auto Show, and despite the concept title, it looks pretty much production-ready. The company calls the crossover “an evolution of the QX Sport Inspiration” concept, and that’s certainly accurate. Side-by-side, the QX Sport, which we already figured was previewing a new QX50, and this concept look nearly identical. The primary changes are bumpers and side skirts that feature the obligatory aluminum trim to look like skid plates, and simple black plastic fender flares. The overall result is a crossover that is pleasant but not exactly exciting that bridges the gap between the small and swoopy QX30 and the large QX60.

The plain wrapper hides plenty of impressive technology, though. Under the hood is Infiniti’s fascinating variable-compression turbocharged engine. It’s a 2.0-liter inline-four that can alter its compression ratio to anything between 8:1 and 14:1. The result is an engine that produces an estimated 268 horsepower and 288 lb-ft of torque. Infiniti says the four-cylinder should be about 27-percent more efficient than a comparable V6. In addition, while the company says this concept just shows a potential application of the engine, it’s safe to say that you can expect it in the production model. With the new engine, the QX50 will also switch from to a front-drive platform, with all-wheel drive definitely an option or possibly standard; the current QX50 is based on the aging rear-drive FM platform used on other Infinitis and the Nissan 370Z.

The other new tech buried in the QX50 concept’s body is what Infiniti calls the “first production-ready incarnation” of its ProPilot semi-autonomous technology. The company doesn’t go into great detail about what it will do except for handling stop-and-go highway traffic. We would hazard a guess that the system is functionally the same as the one introduced on the Nissan Serena minivan in Japan. It goes by the same name and can handle stop-and-go traffic, as well as maintain the car’s lane position and distance behind other cars. It’s another safe bet that we’ll see this system in the production model.

Other details about the car, such as the interior, have yet to be revealed. We’re sure to see it as well as other information about the QX50’s technology when it makes its full debut in Detroit.