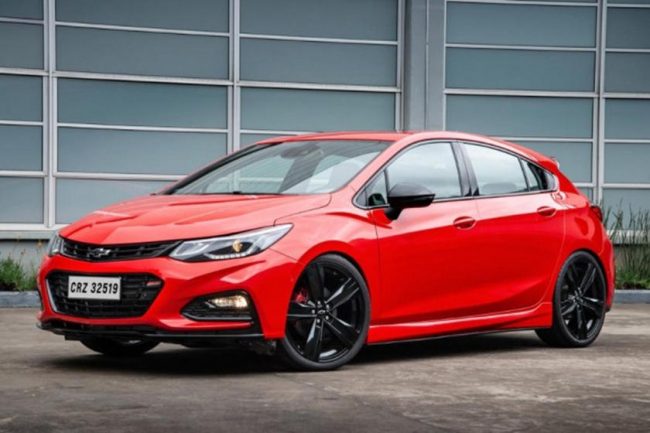 Ever since the Chevy Cruze hatchback came out, we’ve felt that it had potential to become a solid contender in the affordable hot hatch market. And it’s not like Chevy didn’t have experience with fast front-drive cars, just look at the Cobalt SS. Well it turns out at least one part of Chevrolet had the same idea, specifically the Brazilian branch of the American brand. The company built its own Cruze SS concept for the Sao Paolo car show.

Chevrolet didn’t release official images, but you can see it in the video above by YouTube channel Falando de Carro, and found by GM Authority. It doesn’t look like much, since it just uses the American Cruze RS factory body kit and a set of 20-inch wheels. But under the hood, the little 1.4-liter turbocharged four-cylinder has been bumped up to 296 horsepower! Chevy doesn’t give specifics, but looking at the engine bay, it has a variety of upgrades including a high-flow intake, upgraded turbocharger and intercooler piping, and, most important, what looks like larger turbocharger. There are almost certainly upgrades to the engine computer and possibly fuel injection system, too, to handle the extra boost. If anyone speaks Portuguese, feel free to let us know what the man in the video has to say about the engine.

In addition to the power upgrades, the interior and brakes have been given attention. It has a pair of sporty bucket seats with Sparco racing harnesses up front, and in the back, there is a custom sound system. Our video guide also shows us the slotted brake rotors.

This Cruze SS sure seems like a sweet package. Sadly, don’t expect a production one in America anytime soon. Chevy doesn’t seem to have any interest in making the Cruze more enthusiast friendly, since it has dropped the manual transmission from the lineup for 2019. The company has also made it clear that it plans to combat the current crop of affordable hot hatches with the Camaro, specifically the four-cylinder 1LE model. That’s certainly the more affordable strategy from the company’s perspective, since none of the engine had to be tweaked, and the suspension was already developed. That being said, there are probably buyers who would like performance with a practical body style.