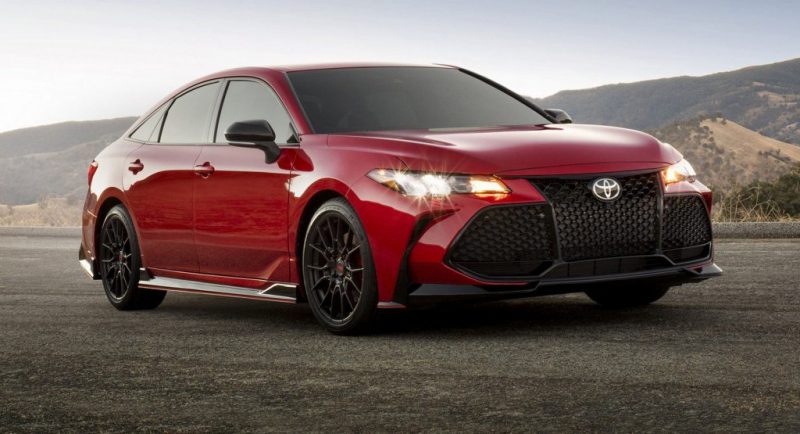 c Nobody was asking for this model, but we’re not complaining that it’s here either. After spending a great deal of time behind the wheel, we’re coming around to thinking that an Avalon TRD isn’t such a bad idea after all. We’re just not sure who’s going to buy it.

Toyota went way further than just building a sporty looking Avalon. There are legitimate mechanical improvements to this sedan that make it much more enjoyable to drive. Firmer, fixed dampers are paired with stiffer springs that bring the ride height down 0.6 inch compared to a regular Avalon. Stiffer anti-roll bars and more robust body bracing underneath also add to the chassis’ increased cornering performance.

Inside, the TRD seats get red stitching and microsuede inserts to keep occupants from sliding around. Similar red stitching gets expanded onto the dash, doors, steering wheel and gear lever. Shiny aluminum pedals are highly visible down below, and red-edged TRD floor mats spice things up even more.

A TRD will set you back $43,255, which is on the high side of the Avalon trim structure. Only the Touring and Hybrid Limited are more expensive. Ours had a couple options (JBL audio with navigation and illuminated door sills) to round the price out to $45,384.

Something else to ponder: Sedans drive really well. I had a lot of fun ripping around corners during a late night take-out run. Hours later I was blasting across open expressways during an early morning dash to my parents’ house. After testing a slew of crossovers in recent weeks, the Avalon felt low and planted with good visibility and light yet connected steering. A large sedan can feel roomy and open compared to the ubiquitous ‘coupe-styled’ crossovers with blocky pillars and massive blind spots.

The Avalon isn’t perfect. The interior has some mediocre materials and severe shapes, and the infotainment is just OK, but that has nothing to do with the segment. The Kia Stinger and the Dodge Charger are similar in that respect, and also among the few sedan standard-bearers left. My weekend in the Avalon reminded me how good a big sedan can be. Avalon sales are down 16.5 percent though November, so apparently most people don’t agree with me.

The car is still missing something, though. If it had more power and all-wheel drive, Toyota would have a real winner in my book — it’s nearly impossible to accelerate if there’s any dampness to the pavement, which is no surprise given all 301 horses are going to the front wheels. As it stands today, $45,394 is just too much money to spend on this car.