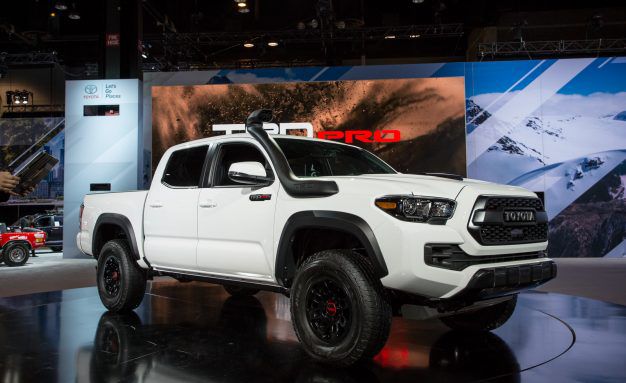 Any questions about Toyota’s commitment to American product – and particularly, trucks – were answered in 2017 when the doors to a $1 billion facility opened in Plano, Texas – its second facility in the state after its truck plant in San Antonio. Toyota recently brought us to the Texas State Fair, and its truck-centric car show component, to see the campus and drive the TRD Pro lineup.

Before Toyota put down roots in Texas, there was Toyota Racing Development (TRD). But it has not always been TRD, and it hasn’t always been an in-house specialty development outfit that focused on off-roading. Toyopet Seibi Co., Ltd. was established in 1954 as a used car refurbisher and shortly after created a motorsports division called the Toyota Sports Corner (TOSCO). It started out by building a Toyopet Crown Deluxe for an endurance rally, and then TOSCO tuned and crafted various types of racecars for the next two decades. It wasn’t until 1976, however, that TOSCO was renamed TRD. TRD USA followed in 1979 as a secondary headquarters and new center of performance development for on-road production vehicles.

This success spawned the first optional TRD off-road package on the Tacoma 4×4 in 1997, followed by the introduction of the 2WD Tacoma PreRunner Xtracab. In 2009, TRD further expanded into the adventure market with its first off-road-themed package on the Tundra. Twenty years later, those two trucks remain two of TRD’s core pillars.

The timing is good, since the truck business is booming, especially for specialty products like Ford’s F-150 Raptor, which has also inspired Ram to build a competitor that will launch in the near future. Midsize trucks are also on the rise, with a new Ford Ranger arriving soon, Honda re-launching the Ridgeline, and GM finding success with its GMC Canyon and the Chevrolet Colorado. The Tacoma didn’t have much competition for years, but that has changed. So have customer preferences for very niche offerings, which explains the complicated array of TRD trims.

In 2017, more than 40 percent of 4Runners and Tundras were equipped with a TRD package, while more than 56 percent of Tacomas had TRD bits. But limiting the number of high-end TRD models helps with their appeal.

“We don’t want to have so many TRD Pros around, so we keep the volume down to be something that is special to the market,” Wilson said. The pricing should help keep those numbers low, as the Tacoma TRD Pro starts at $46,410. The 4Runner Pro is $47,460, and the Tundra Pro starts at $51,040.

Toyota isn’t the only company playing this semi-aftermarket game. While Toyota and TRD have improved their offerings with new variations and equipment, the competition is growing in the segment. Yet, Toyota is a brand that inspires buyer loyalty, and they’ve been doing this a long, long time. Don’t bet against them.