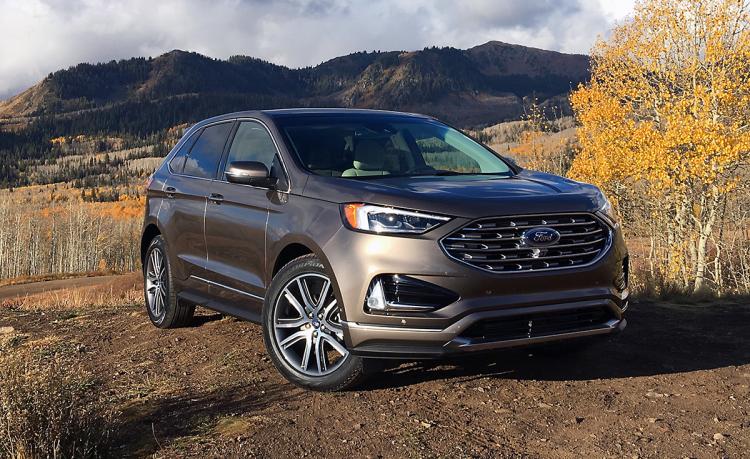 The central Rockies are a wonderful place to visit any time of the year, but the scenery in early fall is particularly striking. I’m in Utah to drive the 2019 Ford Edge, and all I want to do is hike and take photos of the foliage — thin air and brisk wind be damned. The drive from the Salt Lake City airport across the mountains to Park City was a stunning blur of red and yellows leaves, all accented by the white trunks of thousands of birch trees.

Despite Ford’s liberal use of the phrase “all-new” in reference to the 2019 Edge in both press and marketing material, this is a mid-cycle refresh for the second-gen Edge that debuted in 2015. Sales of the current Edge have been increasing year over year since it was launched.

There is plenty of room for passengers and cargo. The front seats are soft, wide and comfortable. The rear seats had plenty of leg and headroom, even in models fitted with the panoramic moonroof. I could comfortably sit in the second row, behind a front seat adjusted to fit my long-legged, 6-foot-tall self. The cargo area is low and wide and fits in between competitors like the GMC Acadia and Chevy Blazer in terms of space.

The Edge gets an updated 2.0-liter EcoBoost turbocharged inline four making 250 horsepower and 275 pound-feet of torque. The 3.5-liter V6 has been dropped altogether. Power is sent to the wheels through a new eight-speed automatic transmission. Front-wheel drive is standard, though a new all-wheel drive system is optional.

The 2019 Edge is on sale now with a base MSRP of $30,990 for a base, front-wheel drive SE. That’s just about the same as the GMC Acadia, the closest competitor in terms of pricing and size. All-wheel drive is a $1,995 option. Prices go up from there, though you can still get a pretty well-equipped Titanium for under $40,000. Those wanting a bit more grunt will have to step up to the $43,350 Edge ST.

Interior complaints aside, the 2019 Edge looks and feels like Ford’s most premium product not fitted with a Lincoln badge. That’s been the general consensus for a while, but the update really drives that point home. It’s quiet and comfortable and the refreshed styling gives it a more premium appearance than either the Escape or Explorer. The loss of the naturally-aspirated V6 is no big deal, as the EcoBoost engine and new transmission offer plenty of refined power.

With Ford dropping passenger cars, it had to reinvigorate the rest of its lineup. Year-to-date sales are down for all Ford crossovers and SUVs, a trend the company can’t afford to let continue. Even if it isn’t all new, the 2019 Edge forms a solid center to Ford’s core lineup.

Previous post Economising on fuel – How easy is it?