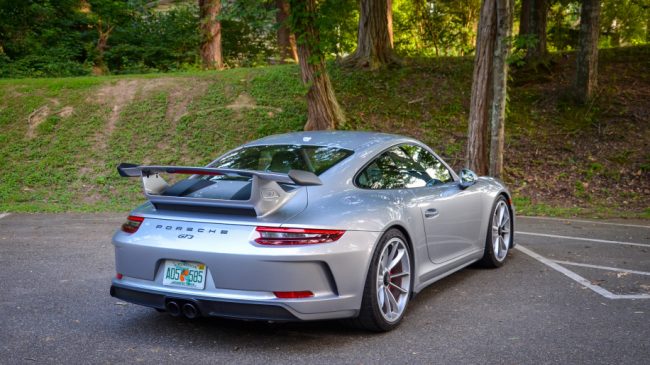 The 2018 Porsche 911 GT3 is an ethereal thing, a car unstuck in time. While everything is getting bigger and more complicated (the 911 included), the GT3 feels delightfully anachronistic with its naturally aspirated engine, six-speed manual transmission and relative lack of creature comforts like automatic climate control, adaptive cruise or keyless entry. It’s a refreshingly simple machine, the exact sort of car I grew up worshiping in magazines and video games.

This 991.2 GT3 uses a race-derived 4.0-liter flat-six making 500 horsepower and 339 pound-feet of torque that spins all the way to 9,000 rpm. Power from the rear-mounted engine is sent solely to the rear wheels, gripping the pavement with a set of Michelin Pilot Sport Cup 2 tires.

The theatrics start the minute you turn the key on the left-hand side of the wheel. The engine roars to life then settles into a mechanical idle that telegraphs its racing roots with a lot of clicking and tapping.

Around Hocking Hills, the GT3 is brilliant. Turn in, and the car moves with an almost unnatural ease, thanks in part to the standard rear-axle steering, but also a healthy dose of old-fashioned chassis and suspension tuning. Like other modern rear-axle steering systems, the car can effectively shorten the wheelbase, allowing for tighter cornering.

You can watch the tach to shift (around 7,000 rpm if you don’t want to bounce off the rev limiter), but — on a backroad like this where you’re not worried about lap times — it’s so much more enjoyable to listen and feel what the car is telling you through your ears and hands. When it comes to modern cars, it doesn’t get much clearer than this.

Time is something I took for granted when I was younger. The GT3 was a refreshing thing, an uncluttered and unfiltered device that reminded me why I fell in cars to begin with. The feeling is somehow both new and nostalgic. It’s a modern throwback to the cars of my youth, before life was complicated and having fun was all I cared about.

Next post 2019 Mazda3 Gets Only Two Engines In U.S.; Here Are Details On Suspension, AWD