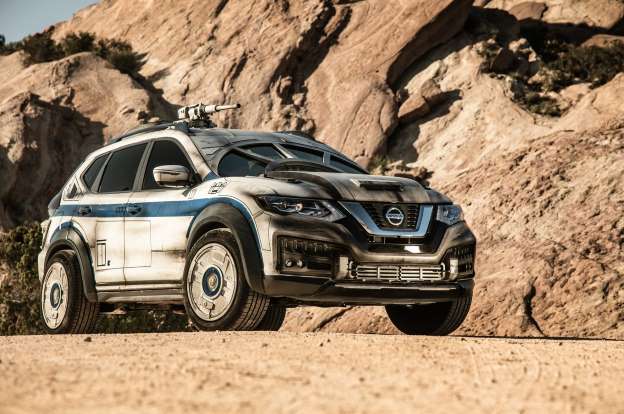 Nissan has created another Star Wars-themed vehicle, and this one really channels the feel of the franchise. Inspired by the Millennium Falcon, this Nissan Rogue debuted at the world premiere of Solo: A Star Wars Story on Thursday.

To mimic the mythical spacecraft, the vehicle adopts custom handcrafted aluminum body panels and a special multi-pane windshield. You’ll also find a radar dish and laser cannon on the roof. In the rear, the subspace-hyperdrive unit glows blue, and there are three Bose speakers mounted prominently over the glass area. Because who needs to worry about rear visibility when you’re traveling through space.

This vehicle is Nissan’s first Star Wars show car that features interior upgrades. Inside the cabin, the dashboard is filled with buttons, lights, sound effects, and special hyperdrive controls. It also has front and second-row chairs like those in the Millennium Falcon.

Nissan worked with Lucasfilm and ILM to design the vehicle. To build it, Nissan turned to Vehicle Effects, which has created custom vehicles for the Fast and Furious and Marvel movies. It has also made Nissan’s previous Star Wars show vehicles.

At last year’s L.A. auto show, Nissan brought out six new cars and trucks for Last Jedi. These included a bewinged Maxima inspired by Kylo Ren’s Tie Silencer, a Rogue with quad laser cannons, and a Titan styled after the AT-M6 Walker and equipped with a custom wrap and megacaliber cannon. In addition to the custom show cars, Nissan has also sold the Rogue One Star Wars Limited Edition featuring special badges.