Few badges inspire loyalty like the one that reads Si. From the early days when it was first applied to the late-’80s CRX, spawning a new generation of enthusiasts and earning our 1988 Import Car of the Year award, to the 1999-2000 Civic Si, a car many consider to be the pinnacle of Honda’s go-a-little-faster carve-a-lot-better cars, the Si-loyal have been treated to and, to this day, openly celebrate the inspiring, sportier versions of the ubiquitous Honda Civic. 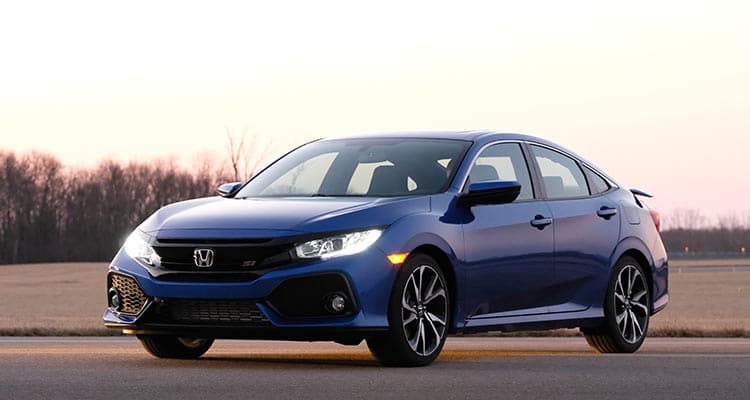 The Civic Si has never been about winning drag races. First, and compared to its predecessor, the 10th-gen Civic grew in every dimension, and this time, the Civic Si coupe and sedan share the same wheelbase from that foundation. Both are longer, lower, and wider than either coupe or sedan from 2015, yet about 100 pounds lighter. The wheelbase on the Si coupe grew by a whopping 3.1 inches, affording greater stability, and much more interior room.

The 2017 Civic Si sedan enjoys a noticeable advantage in front/rear headroom over the coupe. This new platform is also far more rigid and steady than the one it replaces and this contributes to the new Civic Si’s poise and steadiness in a variety of situations. Compared to the garden-variety Civic, the Si has some pretty aggressive suspension tuning that could have made it feel flinty and coarse. Suspension mounts/bushings on the Si are more rigid, anti-roll bars are thicker, springs are stiffer, but the overriding control part of the equation is due to the Si-standard multi-valve adaptive dampers in both cars. They transform the car despite the Civic Hatchback’s identical tire spec at 235/40R18.

Underhood is yet another version of Honda’s now-pervasive 1.5-liter turbo-four, and the only transmission available is a slick 6-speed manual. The clutch pedal, however, is so linear and light that it is difficult to predict the actual bite point where the clutch fully engages. Compared to the Civic EX-T’s 174-hp/167-lb-ft (6MT) version of the same 1,498cc block (or 180 hp/177 lb-ft on the Sport hatch), the Si’s version gets a larger turbocharger, adding 3.8 psi more boost, increased intake and exhaust flow, a recommendation for premium fuel, and a central exhaust tip aft of dual mufflers that sounds appropriately sporty but not obnoxious.

Tuned for an output of 205-hp/192 lb-ft, the best quality of the engine is the linearity and consistency of the torque curve especially compared to a 2015 Civic Si’s 162-lb-ft peak. And without a response-dulling continuously variable automatic transmission, starting at 2,100 rpm and up to 5,000 rpm, the constant shove of torque is what you feel on the way to the horsepower peak at 5,700 rpm. Thank turbocharging for that, which is a first for a Civic Si. With a 6,500-rpm redline, short-shifting at just under 6,000 rpm is the way to get the most performance from the turbo. Despite these output increases, fuel economy remains excellent at 28/38 mpg city/highway mpg compared to the EX-T’s 31/42 mpg EPA estimates.