For those of us who have been interested in fast cars since the 1970s, the lingering impression remains that Lamborghinis are long on looks and big, loud engines and short on sophistication, technology, and refinement. This started changing in 1998 after Audi purchased Lamborghini, and the transition accelerated with the introduction of the Gallardo about five years later. With every subsequent new car, Lamborghini has gotten more serious about offering a more complete set of automotive virtues. The most impressive one yet is the new Huracán Performante. 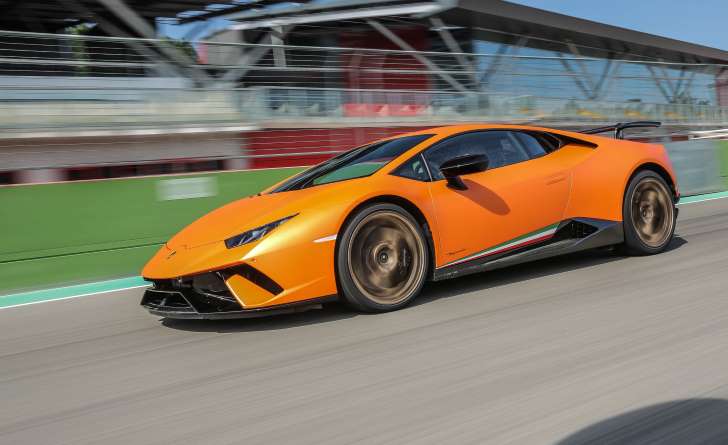 As the name suggests, this is the high-performance version of the regular Huracán, as if such a concept makes sense for a car that can turn the quarter-mile in 10.4 seconds at 135 mph in standard form. But the Performante pulls it off, establishing a new production-car record of 6 minutes, 52.1 seconds at the Nürburgring Nordschleife. Yes, a Lamborghini test driver was behind the wheel and the car was equipped with supersticky Pirelli P Zero Trofeo R tires. But still, that’s some 35 seconds quicker than a base Huracán’s lap time.

This is a much simpler and lighter approach than using some sort of linkage to change the angle of the wing. It also allows side-to-side adjustments, as there is a separation in the middle of the wing’s cavity. So by stalling only one side of the wing, it’s possible to balance the vertical force on the rear tires during cornering.

We had a great opportunity to evaluate these changes at the Imola racetrack, near Lamborghini’s Sant’Agata Bolognese headquarters. Although the track has been reconfigured with several new chicanes since the accident that killed Ayrton Senna in 1994, it is still an extremely fast circuit, well suited to powerful cars.

Ambling on the Avenue

Outside the confines of the track, we flicked the ANIMA to Strada, Italian for street, and happily trundled along through thick city traffic. The dynamic dampers are softer in this mode, and, while firm, the ride never felt harsh over the fairly smooth Italian roads. At the same time, steering effort is more moderate and the transmission operates in an automatic mode, shifting for itself smoothly and letting the aggressive engine loaf at low rpm, which it is perfectly glad to do.

Whether used as a track tool or a Sunday escape vehicle, the Huracán Performante satisfies and excels. And for those who still believe Lamborghinis are solely suited for turning heads on the street, the Performante is pretty good at that as well.

Next post The Next Tesla? Can Genesis Be Disruptive?