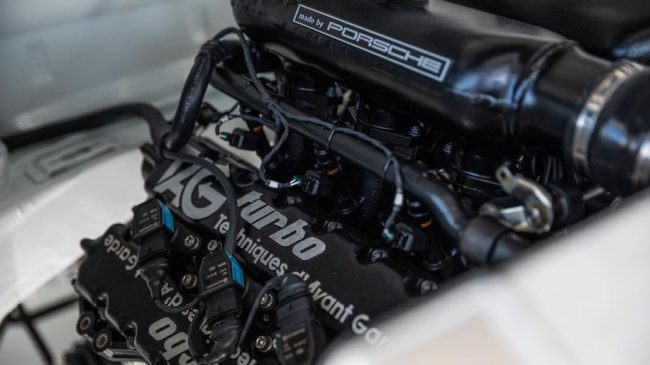 In “Casino Royale,” James Bond gets a lesson in tailored clothing when Vesper Lynd gives him a new dinner jacket. Bond tell her he already has a jacket, and Lynd replies, “There are dinner jackets and dinner jackets. This one is the latter.” News from Lanzante makes us paraphrase that line in saying, “There are 911 restomods and 911 restomods.” Lanzante’s is definitely the latter. The English engineering firm is building 11 Eighties-era Porsche 930s with genuine TAG-branded Porsche engines that the McLaren Formula One team used to win 25 races.

From 1984 to 1987, Porsche built a 1.5-liter turbocharged V6, branded as the TAG-Porsche TTE P01, for the McLaren MP4/2 and MP4/3; if the naming seems odd to cover four years, it’s because McLaren raced the MP4/2B and MP4/2C in 1985 and 1986. The engine produced more than 1,000 horsepower in qualifying trim, and 750 hp in race spec. In its first three years on the grid, the engine powered McLaren to two Constructor’s Championships, and three Driver’s Championships for Niki Lauda and Alain Prost.

During that time, McLaren built a prototype Porsche 930 with that TAG engine, but kept it so far out of sight that people spoke of it as a rumor. The English carmaker finally proved the rumor true a few years ago when it put the prototype on display in the lobby of its Woking headquarters.

Enter Lanzante, which has a history with McLaren going back to at least 1995, when it prepped the Veno Clinic McLaren F1 GTR that won Le Mans that year. More recently, it built road-legal P1 GTRs called the P1 GT, and a one-off P1 Longtail. McLaren sold Lanzante the 11 engines for this run of monstrously overpowered Porsche coupes, and Lanzante showed off the first example at the recent Rennsport Reunion at Laguna Seca — news that somehow got lost in the general Porsche overdose and Moby Dick revival.

Built just like the original McLaren-Porsche prototype, no one will think anything’s astray with the new version’s white bodywork and RUF wheels. The camouflage continues inside, where a pair of upholstered racing buckets might offer a small clue. The instrument panel gives things away, containing a tachometer branded “TAG Turbo” with a 9,000-rpm redline, and a water temperature gauge.

Cosworth is restoring the engines for the program, and each of the 11 examples gets a plaque in the engine bay listing its engine’s race history. In 1984, Niki Lauda won the British Grand Prix and Alain Prost won the Portuguese Grand Prix with the engine in Lanzante’s display car.

Next post Porsche Evaluates Electric Macan For 2022, Lineup That's Half Ev By 2025