All The Gritty Details On Chevy’s New 755hp LT5 Powerhouse! 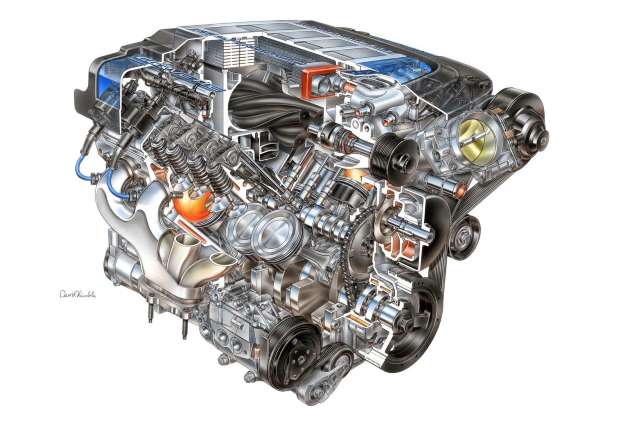 In 1990, regular production option ZR1 was a special performance package intended to transform a base Corvette sport coupe into the fastest production car that could be sold in the U.S., and it was nicknamed “King of the Hill.” Federal exhaust emission regulations started horsepower numbers falling in 1971, and when they bottomed out in 1975 the Corvette’s base 350 was left with 165 hp before slowly making a comeback, reaching 245 hp in 1989. But in 1990, power-hungry buyers had a choice.

Lotus in Hethel, England, was part of GM at the time, and they designed the LT5 based on their stillborn Etna 4.0-liter V8 architecture, with CPC (Chevrolet-Pontiac-Canada) Powertrain division developing the induction system in Warren, Michigan. CPC Powertrain Engineering was also rethinking their 30-plus-year-old pushrod V8 to determine what it was going to take for it to produce the DOHC LT5’s 405 or more hp.

A forced-induction engine first appeared on the Corvette’s option list in 1987 with the Callaway twin-turbo package available through Chevrolet dealers, but not installed by GM. It boosted the L98’s output from 240 to 345 hp. This system was effective, but bulky and hard to package, while Eaton would later develop a more compact, belt-driven roots-type supercharger with finned intercooler tubes over its rotors in the same housing.

Like the LT4, the LT5 will be assembled by hand in GM’s Performance Build Center at the Corvette assembly plant in Bowling Green, Kentucky, and both engines will be built on the same aluminum cylinder block. This Gen V block is also used for the LT1 and has 4.06-inch bore cast-iron cylinder liners that, with the 3.62-inch stroke crank, add up to 376 cubic inches. The block features nodular-iron six-bolt main bearing caps and has a provision for oil-spray piston cooling.

Engine oil pressure also controls a cam phaser on the front of every Gen-V camshaft which changes its angular relationship to the sprocket, allowing the valve timing to be advanced for idle and retarded for maximum power. Large lightweight valves are used in the forced-induction heads with 2.13-inch titanium intakes and 1.59-inch hollow steel sodium-filled exhaust valves.

We asked Jordan Lee if, with GM spending billions on electrification and autonomous vehicles, the LT5’s 755 hp at 6,300 rpm and 715 ft-lb of torque at 4,400 rpm was the high watermark for GM’s internal combustion engines. We were very relieved to hear that development of new combustion engines is far from over or even winding down, and that the small-block pushrod V8 has a bright future.

This is what Jordan Lee’s boss Dan Nicholson, vice president of GM’s Global Propulsion Systems, has to say about the end results of the Small Block team: “The LT5’s horsepower puts Chevrolet and our small-block over the 700-horsepower threshold for the first time, but just as important, that power is very driveable in the ZR1. Painstaking engine integration with a dynamically capable vehicle enables the use of all 755 hp. The sensation behind the wheel of this dual fuel-injected, blown small-block is something hard to find elsewhere in a lifetime.”