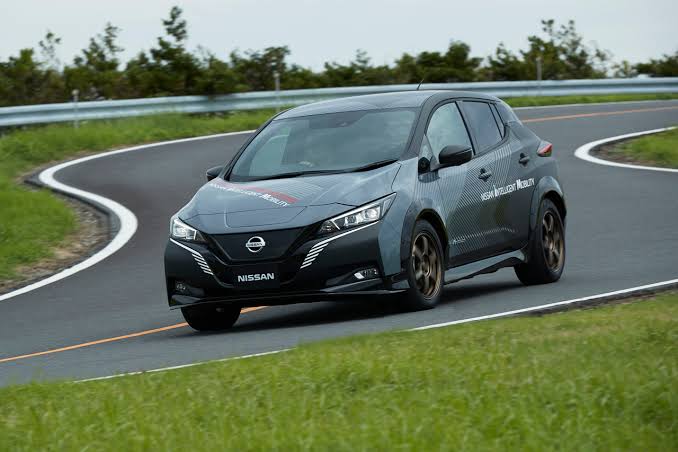 Compromise used to be the unfortunate truth in auto manufacturing. The hardware needed to build an enthusiast-pleasing machine wasn’t necessarily compatible with producing a comfortable, safe vehicle. With the advent of modern electric vehicles, this situation is changing, and our recent drive of Nissan’s e-4ORCE prototype all-wheel drive system shows how.

The vehicle in question is a regular Nissan Leaf Plus that’s been outfitted with two Leaf Plus motors (one in front and one in back) and Nissan’s e-4ORCE all-wheel drive system. A variety of tests were laid out for us at the Las Vegas Motor Speedway during CES last week to let us try out Nissan’s new dual-motor EV system. Turns out, e-4ORCE offers more than just increased traction.

All the proof is in the driving. Our first test was a straight-line acceleration run. Two Leaf Plus motors combine for a system output of 304 horsepower and 502 pound-feet of torque. To put it lightly, the e-4ORCE test car made the regular Leaf Plus feel as though it was hardly moving. The quick response from the go-pedal was just as impressive — Nissan claims its powertrain responds quicker than any other dual-motor EV system that it benchmarked.

They wouldn’t enjoy the slalom course, which gave us our first hint of how fun this all-wheel drive system could be. The Leaf is no performance car stock, but with the e-4ORCE powertrain and a bit of suspension work,it turns into a little hot hatch. There’s still plenty of body roll diving in and out of the cones, but squeezing the pedal on in corners doesn’t cause the e-4ORCE Leaf to understeer anymore. Instead, it tightens the line and hugs the cones even tighter.

Our last test was meant to display what the e-4ORCE all-wheel drive system was capable of when pushed to the limit on a slick surface. After a truck wetted a large, constant-radius corner, we were told to barrel into it and give the Leaf everything it’s got while holding the wheel at a steady angle. The front-drive Leaf Plus just understeered and drifted out way beyond the cones.

The ease at which the Leaf e-4ORCE accomplished this task is what boggles our minds. We were simply passengers behind the wheel: Put your foot to the floor, turn the wheel and go. The computers calling the shots for the dual-motor AWD system will handle everything else. This will come in handy on a regular crossover in slick road conditions, but it’s also surprisingly capable on an autocross course.

Previous post Future Of Car Sharing: How Getting Rid Of Your Car Is Good For The Environment?