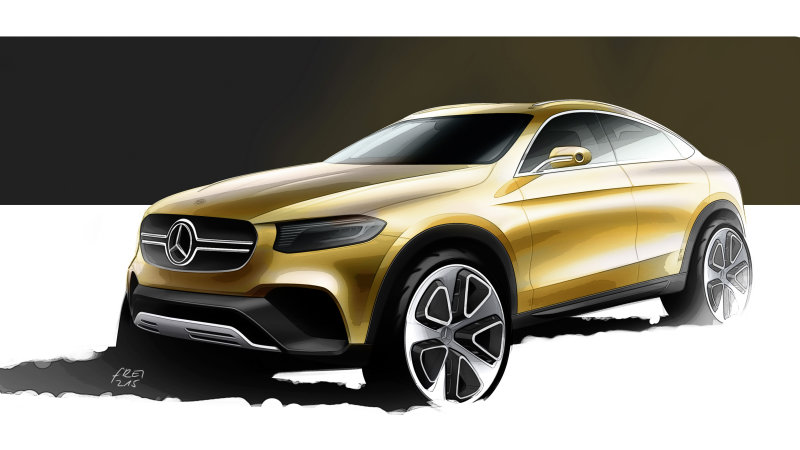 Say what you will about slant-backed crossover coupes: if the industry has learned anything from BMW and its X6, it’s that they’re popular… and profitable. Little wonder, then, that Mercedes followed suit with the release of the GLE Coupe. And now it appears set to follow the lead set by the BMW X4 as well with a smaller GLC Coupe… at least, that is, in concept form.

Previewed in this latest teaser rendering is the Concept GLC Coupé, a design study which Mercedes is set to present at the Shanghai Motor Show later this month. The statement that accompanies it (which you can read below) doesn’t tell us much, except to say that it is “near-production-standard” – which is to say that it stands a strong chance of reaching showrooms.

As it is, the GLC with a conventional roofline is set to take the place of the GLK in Benz’s expanding crossover lineup. The emergence of this concept ought to preview that new model’s styling, regardless of how steeply its roofline tapers off towards the back.

The Shanghai show is, incidentally, the same venue Mercedes originally floated the idea of its smallest crossover with the presentation of the Concept GLA two years ago. And as we all know, that subsequently entered production – in a form closely following that of the concept. So we wouldn’t be surprised to see a GLC Coupe emerge in close proximity to its more conventional counterpart (maybe even before), heavily influenced by the show car we’ll see later this month.

Next post Electric Aston Martin Rapide Could Be On The Way