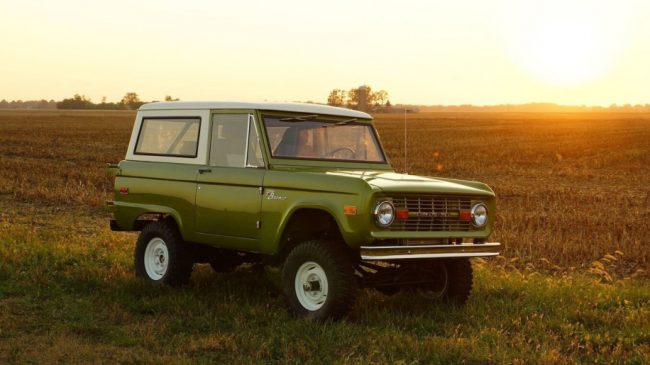 For anyone who loves the original Ford Bronco, we have some fantastic news for you. Gateway Broncos and Ford have just reached a licensing agreement that allows Gateway to build limited numbers of 1966-77 Broncos. This isn’t just some cheesy take on the original Bronco either. Gateway is building these trucks with Ford’s blessing, and they come with up to a five-year bumper-to-bumper warranty.

Gateway was started by Seth Burgett in 2016 as a Bronco restoration company, but it’s quickly grown into something much more than that. We’ve seen recreations like the Icon Bronco, but nobody has this kind of an agreement with Ford to remake the vehicle. These new trucks from Gateway won’t just be restored, but rather, they’re going to be crafted with new metal all around. If you want, Gateway will build you an entirely new body and frame. That’s right, no donor car or scrapping necessary. Every last bit of the vehicle can be brand new, just as Ford intended when they rolled into the world in 1966. However, the option of restoring an existing vehicle or putting a new body onto a vintage frame remains.

To begin, Gateway will offer three models of the Bronco it calls the Fuelie, Coyote Edition and Modern Day Warrior. These range in price from $120,000-$180,000. Gateway is improving upon original Broncos with new technology, in addition to making them appear original. The Coyote Edition gets a Ford 5.0-liter V8 predictably, as does the Modern Day Warrior model. The Fuelie makes do with a 347 Stroker. Four-wheel disc brakes from Willwood are included to make stopping the now-faster truck less stressful. Noise and vibration reductions are engineered into the new vehicle too.

One could draw comparisons with Singer 911s, but these guys are even different from them. Gateway is literally adding first-generation Broncos to the road, and not just bringing back to life what has already existed for half a century. The caveat with this one is the new technology being put into them. There’s certainly something to be said for making it exactly the way it was from the factory, but the power and reliability of new engines is tough to argue with.

With the new Bronco(s) on their way, excitement around the model name is building to a fevered pitch. If the new one isn’t exactly your cup of tea when it’s eventually revealed, options abound. That is, if you have the princely sums of cash Gateway Broncos is asking — the company says it expects to build four vehicles per month in 2019.