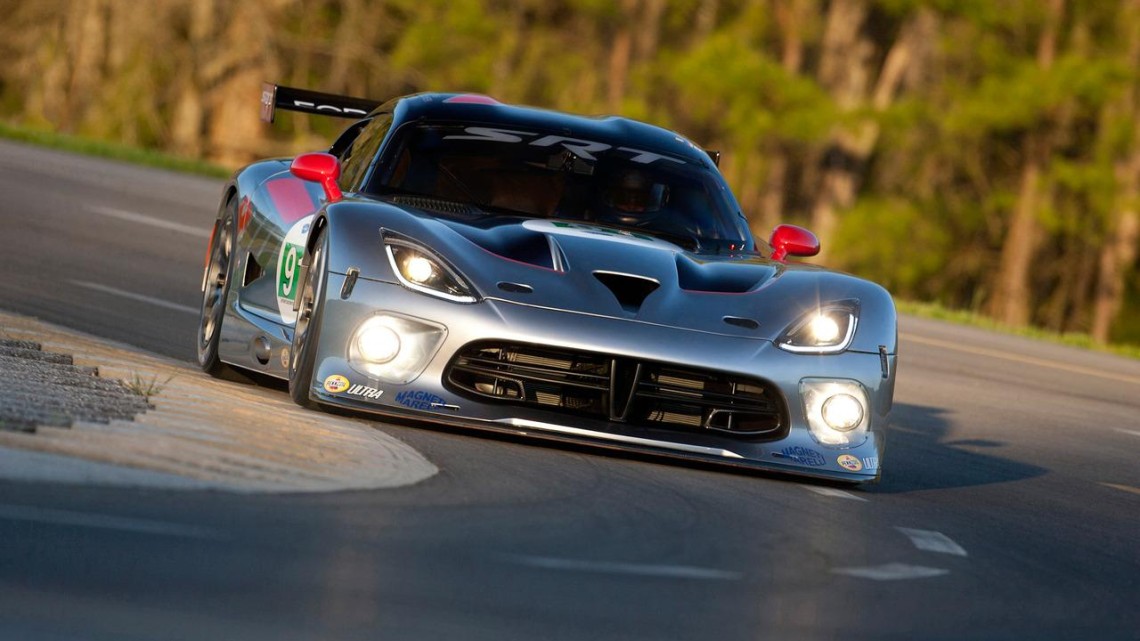 In the IMSA TUDOR United SportsCar Championship’s last race, the six-hour endurance contest at New York’s Watkins Glen International, the No. 91 Dodge Viper SRT GTS-R claimed second, while the No. 93 took home third – a result that identically matched the team’s finish at Canadian Tire Motorsports Park (Mosport) in July of 2013.

The Watkins Glen result was the team’s second dual podium and the combined results marked the Viper’s best finish in 2014. After tallying four podium finishes in three endurance races in 2014, SRT Motorsports is aiming for a strong showing in the sprint format at Mosport, a track where the team had familiar success in 2013.

The 2013 Mosport finish was the team’s first double podium and Jonathan Bomarito started the race from the pole after a track record qualifying lap for the GT class (1:15.462). The SRT Motorsports team surged following the Mosport success and went on to win the following race at Wisconsin’s Road America from the pole, marking the team’s first victory, and tallied four top-fives over three events.

In both years, the SRT Motorsports dual podium has come in the fifth event of the season. Knowing that, the Viper team is hopeful another summer surge – and perhaps a win – is coming.

The SportsCar Grand Prix, the sixth event for the GTLM class in the 2014 IMSA schedule, will be broadcast live from Canadian Tire Motorsports Park this Sunday, July 13 at 2:00 p.m. EDT on FOX Sports 1.

PAIR OF PODIUMS: SRT Motorsports finished second (91) and third (93) in the Sahlen’s Six Hours of The Glen at New York’s Watkins Glen International on Sunday, June 29, marking the team’s third and fourth podium results of the season. If not for a late-race caution, the No. 91 Viper driven by Dominik Farnbacher and Marc Goossens would have likely won the event utilizing fuel strategy. Through five races, all four Viper podiums have come in endurance events and SRT Motorsports is the only team to finish on the podium in all three endurance contests in 2014.

DUELING TO THE FINISH: The dual podium finish by SRT Motorsports at Watkins Glen was the second time the team had achieved the feat. Prior to The Glen result, SRT Motorsports finished second (91) and third (93) at Canadian Tire Motorsports Park (Mosport) in 2013 for the team’s first double podium. The 2013 Mosport race weekend marked the start to a surge in SRT’s performance that saw the team tally their first win (Road America), two poles (Mosport and Road America) and six top-five results over a four-race span that year.

CANADIAN CONFIDENCE: SRT driver Kuno Wittmer is from Montreal and is so familiar with Canadian Tire Motorsports Park that he can tell you where to camp for the race. Wittmer has logged thousands of laps on the track with multiple championships and has camped at the track during a few of his own race weekends. He scored his first-ever podium at the track when he was 16 years old and went on to win numerous events at the track as he advanced his racing career.

SNAKES SHED SKIN: SRT Motorsports returned to the Dodge Viper’s classic livery during the Watkins Glen International race weekend in an effort to honor the Viper’s racing heritage. Sporting ‘Viper Red’ and ‘Race White,’ the team recorded a dual podium finish in the same livery worn by Dodge Viper entries that took the overall victory in the Rolex 24 At Daytona in 2000, a GTS class win in the 2000 24 Hours of Le Mans, and American Le Mans Series (ALMS) championships in 1999 and 2000. The team will continue to utilize the classic livery throughout the 2014 season.

SRT POINTS PRIMER: After five of 11 races for the IMSA TUDOR GTLM class, the Viper SRT GTS-Rs rank third (91) and sixth (93) in the team standings with 140 and 137 points, respectively. Farnbacher and Goossens are third in the driver standings with 140 points, while Jonathan Bomarito and Wittmer sit in fifth with 137 points. In the manufacturer standings, SRT ranks fourth with 148 points, 11 marks behind first place.

Dominik Farnbacher, driver, No. 91 Dodge Viper SRT GTS-R
How competitive is the GTLM class right now?
“Watkins Glen showed us that we are in the same window with the other cars. If you look at the times, all the manufacturers and all the cars are within three tenths of a second. The quality of competition is high. We are competing against all of the high-end manufacturers and cars with the biggest history in racing – we are on the same level and competing against the best. Our goal is to show everyone that SRT builds the best race cars and the best street cars. We want to showcase the confidence we have in our product and Mosport is the right place with its high-speed race track and the Viper is suited for high speed.”

What do you need to have success at Mosport?
“It’s a very fluid track, you need a car with a good amount of downforce that is well-balanced for the high-speed direction changes to the left and right. Basically, we need to be glued to the track. If you get off line a little bit, you end up in the marbles and you don’t want to do that. The Viper is actually very good at high speed and it’s very stable. The back straight is a long, long stretch up the mountain and that helps with our car because we have a lot of torque. Our car was very strong uphill last year.”

Marc Goossens, driver, No. 91 Dodge Viper SRT GTS-R
Does the Watkins Glen result give the team added confidence moving forward?
“Scoring second and third places at The Glen after the little break we had helped to boost the confidence and motivation for everyone. The team worked hard and long hours all weekend, and to have both cars on the podium was amazing. For the drivers, it is good to feel that we are competitive again, especially going back to a track that we were strong on last year. We scored our first double podium at Mosport last year. It’s pretty important to start the weekend with a positive mind set.”

Jonathan Bomarito, driver, No. 93 Dodge Viper SRT GTS-R
How do you feel entering the Mosport race weekend?
“Anytime you come off a good result it gives you extra confidence going into the next round. There are some similarities between Watkins Glen and Mosport, so we can take those and hopefully start with a very good car right away. Mosport is a very fast, challenging course that requires you to be very confident with the car. A slight imbalance of the car will make the driver very nervous because the corners are at such a high speed. The No. 93 Viper team scored our first pole position at Mosport last year, so we are excited to go back and fight for the win. We also recorded our first dual podium, which was an amazing accomplishment for the team and to share a podium with your teammates is very special. We all work very hard and help each other, so it was very rewarding.”

Kuno Wittmer, driver, No. 93 Dodge Viper SRT GTS-R
Do you enjoy racing at Mosport?
“Absolutely, I like Mosport. It’s one of the circuits where I probably have the most laps on. The first time I raced there was in 1999 and I wouldn’t be shy to say I have 1,000 to 2,000 laps there, easily. From 1999 all the way through 2013, I’ve raced there in multiple championships and easily up to four or five race weekend a year. It’s a circuit that I’ve always liked and I’ve been fortunate to go there with multiple series I’ve raced in. I’ve grown to really gain a lot of respect for Mosport, especially in my early years.”

What makes this an important event?
“Mosport is very important for the IMSA TUDOR Championship being the only Canadian race. Unfortunately, it is the only Canadian race; being from Montreal I’d like to see more, of course – hint, hint. Mosport draws a lot of attention from spectators that come from Toronto and the Ontario-area and even from the province of Quebec, some that make the five-hour drive to the race. In Canada, we have diehard fans for sports car racing. It’s important that we have this race on the calendar. For myself, I think it’s going to be very important to perform well at Mosport being midseason with the Viper program in GTLM. If we can score a good result there, I think we’re in a good position for the championship and back on track where we need to be.”

Next post Goodwood Festival Of Speed Offers Sport And Show