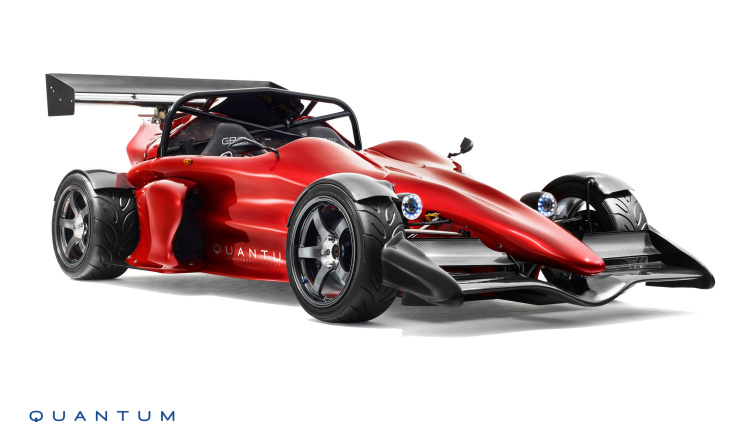 Fans of stripped-down performance machinery like the Ariel Atom or KTM X-Bow know all about getting the most out of a small package. And now there’s a new challenger on the block.

It’s called the Quantum GP700, and it’s the first product from Australian firm Quantum Performance Vehicles. It may look unusual, but it promises otherworldly performance. The tiny machine packs a 2.7-liter four-cylinder engine with twin superchargers to produce a massive 700 horsepower and 482 pound-feet of torque, channeled through a six-speed Holinger sequential gearbox.

Weighing in at an output-matching 700 kilograms (about 1,500 pounds), it’s got the same perfect power-to-weight ratio as the Koenigsegg Agera One:1. That means it will rocket to 62 miles per hour in a claimed 2.6 seconds. A high level of mechanical grip (to say nothing of the downforce from those massive wings) means that it’ll corner at 1.9 Gs even in slow corners – and up to 2.5 Gs when cornering at 112 mph. Get it up to 174 mph and it’ll (theoretically) drive upside down on the ceiling, but we wouldn’t recommend you try that out. Stomp on the brakes and you’ll feel 2 Gs of decelerative force pulling at you – more than a jet landing on an aircraft carrier with a tow hook.

Each example of the GP700 will be individually catered to its owner, and will be offered in markets around the world – including the United States – with a full trackside support program not unlike what McLaren offers with the P1 GTR or Ferrari the FXX K. But unlike those track-bound machines, Quantum will let you drive your GP700 home after.

“Due to the limited production we will only seek type-approval for vehicles sold into the US,” Quantum told Autoblog by correspondence. “Registration of a vehicle will be dealt with on an individual basis and we will make necessary design modification if required during construction… as part of the driver support package. The current prototype of the GP700 is registered in Australia, in our opinion one of the most regulated markets in the world. We therefore are confident we can have vehicles certified globally case by case.”

Pricing is still being worked out for individual markets, but we’re told it will come in under $700k with all the bells and whistles. A more accessible version with a hardtop is also under development for a much lower price as well.

Previous post BMW X1 - The Way Of The Future