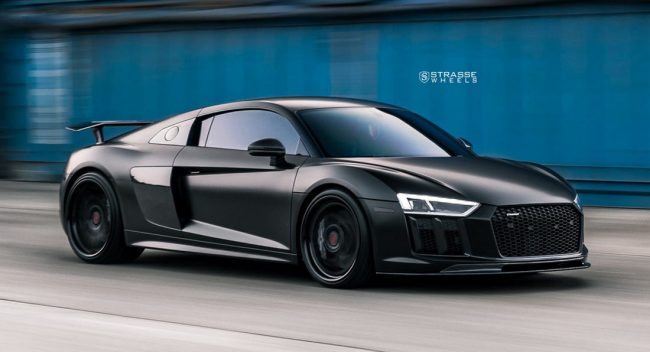 If you’ve been waiting 10 years to buy an Audi R8 V10, the all-new Decennium edition was made for you. Decennium is Latin for “decade,” which is how long the R8 V10 has been around, and Audi is rolling out a special run of 222 cars to coincide with the European sales launch of the refreshed 2019 R8.

The Decennium coupes offer an exclusive Daytona Gray matte paint with 20-inch wheels, and also feature an engine cover in matte bronze. Its front spoiler, side sills, and diffuser are gloss black, as are the Audi rings and other badges. If that sounds too drab for your tastes, the special edition R8 can also be ordered in the metallic shades of Suzuka Gray, Floret Silver, Mythos Black, Ascari Blue, and Kemora Gray.

The Decennium’s cabin is dotted with special logos and plenty of glossy carbon-fiber inlays. The sport seats have Alcantara inserts with diamond quilting, and copper-colored contrast stitching is applied to the center armrest, door panels, and Alcantara-wrapped steering wheel, which also has a hash at the 12 o’clock position.

The R8 V10 Decennium goes on sale in Germany soon and will cost €56,000 more than the basic, lower-output coupe, or €222,000. That’s roughly $252,000 at today’s exchange rates. It’s unclear if any Decennium models will be offered in the U.S., but it’s unlikely. The regular 2019 R8 will hit American shores later this year, and pricing has yet to be announced.