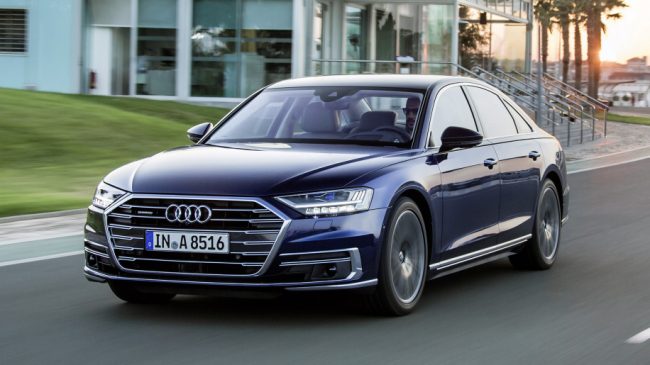 You’d never guess it from the 2019 Audi A8L’s subtly creased sheetmetal, but the latest übersedan from Ingolstadt hides an arsenal of computing power that makes it one of the most sophisticated sedans on the planet. No fewer than 24 discreetly hidden sensors include six cameras, five radar sensors and a laser scanner to take in the surrounding environment — a good thing, since the A8 will be the first Level 3 autonomous production car when it hits showrooms in fall of 2018 (assuming the bill clears a U.S. Senate vote).

Let’s start our A8 experience where most drives begin: the parking garage. Audi has ballyhooed the bejeezus out of its on-street parking system that uses swarm data to mine available parking spaces at GPS destinations, but they’ve also developed several features on the hardware side intended to make the act of parking more carefree.

Depending on your level of trust, you can also press the Audi AI button and have the car swerve to avoid obstacles at slow speed or, better yet, park or unpark a car from a tight spot as you stand nearby and watch. I found the exercise of watching the A8 move on its own volition both slightly harrowing and strangely reassuring, a surreal out-of-body vehicular experience that demands total trust in the computers.

Leave the parking garage and you’ll have a better opportunity to savor the understated cabin, a serenely neutral space encased in double-paned glass. The prevailing theme is one of restrained modernity: touchscreens fit flushly against piano-black surfaces and primarily linear forms inspire a feeling of clean expansiveness. Passenger comfort is also bolstered by an outstanding menu of seat massage options, which include a heated foot massage panel for right rear passengers.

A few months later, the A8 60 TSFI will drop, sporting a 4.0-liter twin-turbo V8 producing 460 hp and 486 lb-ft. The V8 is more befitting a big, bad flagship, emitting a hushed exhaust note and smooth, robust waves of torque which are considerably more satisfying than the V6’s. Incidentally, both powerplants are mild hybrids using a belt alternator starter attached to the crankshaft, enabling up to 40 seconds of engine-off coasting between 34 and 99 mph.

It’s easy to linger on the A8’s driving dynamics, which are dominated by a sense of serene isolation rather than outright driver involvement. But the prime differentiator when the A8 hits the road will be the electronics that work seamlessly behind the scenes to deliver Level 3 conditional autonomy, a crucial stage on the road to fully self-driving cars that enables truly hands-free driving until the computer prompts you to take over. While the A8’s implacable persona might be a bit removed for some, it just might be the perfect complement to a car capable of driving itself when the conditions allow.

Next post New cars vs. used cars – the pros and cons and how mileage affects your buy