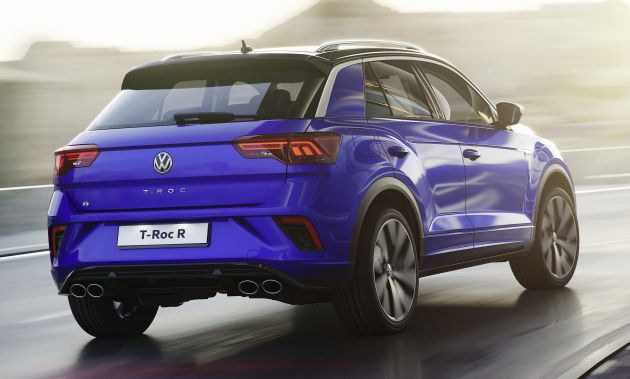 Volkswagen’s R division didn’t skimp on the specs when developing the T-Roc R. The compact performance crossover gets the same powertrain as its hatchback sibling, meaning a 2.0-liter turbo four-cylinder with 296 horsepower and 295 pound-feet of torque. All that shimmy gets channeled through a seven-speed dual-clutch gearbox and a Haldex all-wheel drive system. Even the suspension components are the same as on the Golf R, and the 17-inch brake system comes from the Golf R Performance.

The output gets the T-Roc R some 110 hp and 59 lb-ft beyond the standard all-wheel drive version. It sprints to 62 miles per hour in 4.9 seconds. That’s just 0.2 seconds adrift of the Golf R. Top speed is the same electronically limited 155 mph.

It sets itself apart even when standing still with R badging on beefier front and rear fascias, vertical DRLs next to massive intakes in the front bumper, matt-chrome-look mirror caps, black brake calipers, a contrasting diffuser in back and quad exhaust. Eighteen-inch Spielberg wheels come standard under slightly wider wheel arches, 19-inch Pretoria wheels in dark graphite are an option, along with an Akrapovic exhaust. A contrasting black roof can be optioned with the exclusive Lapiz Blue Metallic or the other seven colors in the palette.

T-Roc R is lowered 20 millimeters compared to the standard T-Roc. Progressive steering comes standard, so too adaptive dampers, but Volkswagen’s DCC adaptive damping will be an option. Handling on the go has been sharpened with the help of World Rally Championship driver Petter Solberg and VW works racer Benjamin Leuchter. Their assistance is likely sharpest when the T-Roc’s in race mode, with its ESC turned off.

The interior has all the R logos, cross-stitching, ambient lighting and stainless steel pedals you’d expect from the brand.

Volkswagen says it will bring a near production-ready concept to the Geneva Motor Show in advance of the T-Roc R going on sale later this year.

Next post Quick RV Storage Tips from the Experts