The Hydrogen BMW i8 is Pure Evil 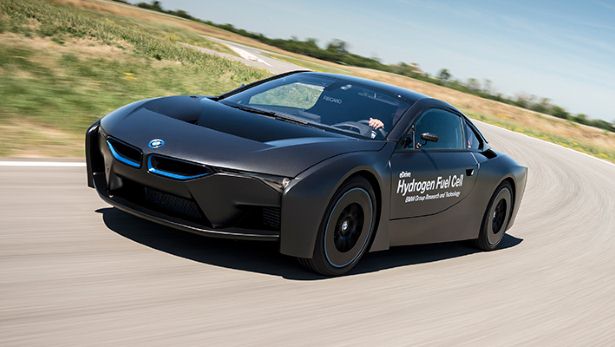 This isn’t BMW’s Mad Max moment, despite that ‘80s-spec bodywork. No, this is an experimental BMW i8 supercar, reworked as a hydrogen fuel-cell vehicle.

It was presented at one of BMW’s Group Innovation Days at its testing ground in France, which, as the name suggests, is a day full of weird and wonderful things we might see in the future. Things like the i8’s “standard” drivetrain in a 2 Series Active Tourer; a water-injected BMW M4 engine with more power; and of course, this unnamed, i8-based hydrogen FCV and a hydrogen 5 Series GT.

We’re told this hydrogen i8 prototype was actually built in 2012 – before BMW signed a collaboration deal with Toyota – and is one of the very first i8 test mules made.

So it sits on the i8 platform, using – we suspect – much carbon fibre and many lightweight materials. Also, there’s more than a whiff of Terminator/Mad Max­spec, future-Armageddon styling about it.

This i8 test vehicle gets a tunnel tank mounted in the middle of the car, capable of storing hydrogen at 350-bar pressure, with an estimated range of over 300 miles (483km).

This hydrogen feeds a fuel cell stack – built in partnership with Toyota – with the resulting power reaching an electric motor. Total system power stands at 268bhp.

But, BMW reckons that this hydrogen tech allows for emission-free driving, “instantaneous power delivery and impressive dynamics” and refuelling in under five minutes.

“Fuel cell technology makes an ideal addition to both the BMW i models and, in the future, the series-produced models from the BMW brand,” says BMW. “Storing hydrogen in a cryogenic pressure vessel can, depending on the type of vehicle, allow an operating range comparable with that of conventional vehicles powered by combustion engines.”

As such, you’ll see from the above pictures that BMW also fitted this experimental drivetrain into a 5 Series Gran Turismo, and maps out a four-pronged approach to its powertrains: efficient, turbocharged combustion engines, plug-in hybrids, full battery EVs and hydrogen.

More importantly, how much do you want a zero-emissions future sports car with Terminator bodywork?

Tags: The Hydrogen BMW i8