The GTC4Lusso is A Ferrari Enzo Himself Would Have Loved 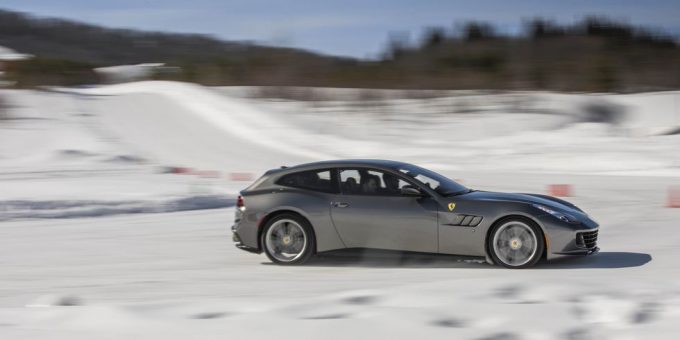 By many accounts, Enzo Ferrari didn’t see the point of the whole race-car-for-the-street thing, even though that’s what his company built. His personal cars reflected this. Ferrari was famously fond of the Peugeot 404 and 504 sedans, and he even drove a Mini in winter.

The only Ferraris he was known to use personally were the company’s 2+2 GTs, four-seat luxury cars perfect for getting you to the track—not setting laptimes when you arrived. A 1961 photo shows Ferrari and future F1 champ Phil Hill leaning against a 250 GT/E; a 1966 shot, below, sees him getting behind the wheel of a 330 GT 2+2. These were true grand tourers, designed for swiftly jaunting to the south of France—the sort of thing wealthy Italians did in the 1960s.

Despite the association with Il Commentadore himself, Ferrari’s 2+2s have always carried a stigma. This is true today with the GTC4Lusso.

The successor to the FF, the GTC4Lusso is a front-engine V12 four-seater like all of Ferrari’s grand tourers, but this one has four-wheel drive and shooting brake looks. If you view, say, the 488 GTB or the 812Superfast as quintessentially Ferrari, you’d likely dismiss the GTC4Lusso.

In truth, this car pushes what it means to be a Ferrari, embracing company traditions while subverting expectations. And after a brief spell behind the wheel, I can tell you that the GTC4Lusso never lets you forget it’s a Ferrari.

Where the Ferrari really impressed, though, was in the snow. The morning after my first night with the Lusso, Ferrari had us head to Mecaglisse, an ice-covered circuit about an hour west of Mont Tremblant. I decided to take what looked like a scenic, twisty route filled mostly with backroads. It proved to be a ill-considered choice.

You see, a lot of the roads up here aren’t paved. And there’s a lot of snow, so basically, most of my drive to the track was on roads that looked a hell of a lot like a rally stage. But seeing as this car costs around 15 times as much as a new base Miata, I decided tail-out WRC-esque antics would be a horrendous idea.

That’s where the Lusso’s Snow mode comes into play. Dial it up and the throttle mapping gets gentle, and Ferrari’s excellent traction control system starts working its magic. The system keeps you out of danger—or at least away from expensive crash-induced body repairs—but it doesn’t sap the fun from the Lusso. You can still enjoy what makes it great, even at reasonable speeds on a slippery surface.

These roads are probably the last place you’d expect to find a Ferrari—even with its subtle Grigio Ferro paint, I couldn’t help but feel like I was sticking out quite a bit. And yet, the Lusso never feels out of its depth, even though the prancing horse badge on the steering wheel tells you it should. With the right tires, the GTC4Lusso is ready for winter. Maybe you wouldn’t take it out in a blizzard on unplowed roads, but you could certainly use it the next day.

The Lusso challenges conventional wisdom about what it means to be a Ferrari. It demands reappraisal among sports-car enthusiasts. So what if it’s not a 488? You can drive this one on ice with three friends riding along.

It’s different from what people expect of a Ferrari, but that doesn’t make it a worse Ferrari. In fact, it’s this very quality that makes the Lusso a more interesting car. And knowing that Enzo would have dug it? That makes it all the better.