The 2018 Honda Odyssey Is Your Connected Daycare Suite On Wheels 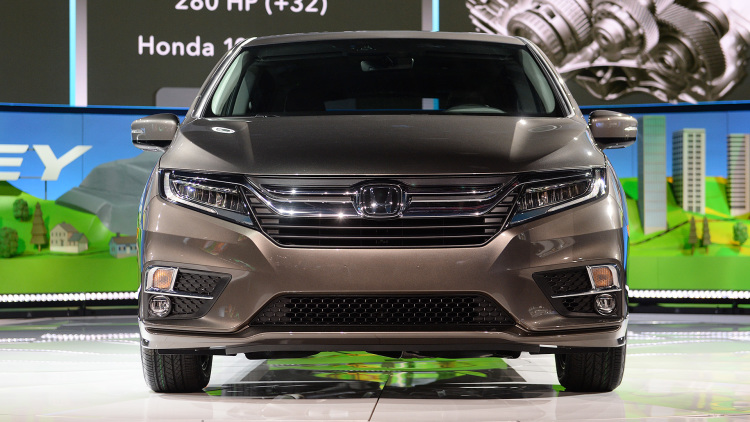 Honda has remade its long-running Odyssey minivan with the connected generation and their offspring in mind. The 2018 Odyssey launches this spring with features that help up to eight passengers talk to each other – or more likely zone out and stream web videos.

Yes, it has a new design and powertrain, but if you’re a new parent, the interior is what you’ll care about. There’s bevvy of new features. CabinWatch uses a camera to allow front passengers to monitor activity in the back with a feed displayed in the eight-inch high resolution touchscreen mounted in the dash. A CabinTalk feature lets the driver talk to passengers by booming their voice through the speakers and headphones (Sally, keep your hands to yourself!). The rear entertainment system has a 10.2-inch screen mounted in the ceiling and can stream PBS Kids, Spotify, and other feeds via the minivan’s WiFi system, public internet, or your mobile provider. Honda offered a 16.2-inch split screen in the outgoing model, but claims the new one makes for a better experience. We’ll wait until Duck Tales returns this year to confirm that.

Then there’s the apps. There’s literally one called the “How Much Farther App,” which shows the progress of the road trip. Another one can be used to control the entertainment and climate systems, and it can send directions from your phone to your Odyssey’s nav. It also has a playlist function that lets eight people create personalized music choices and uploads it to the audio system.

As far as hardware, Honda is dialing up Disney levels of magic inside. The old van had a “Magic Seat” in the third row, which was a fold-down seat. Now there’s “Magic Slide” in the second row. When the middle seat comes out the two remaining ones slide side-to-side for easy access to the back or to give more space for the second-row passengers. No pixie dust needed.

The third row is reasonably comfortable, we sat back there at a preview event in Detroit last month, and there’s some leg and headroom for an average sized adult male. Your knees aren’t pressed to your chest at least, and the Magic Slide is a clever innovation, especially for ingress and egress. Obviously, this is all very family friendly. “We had a clear direction for the development of this fifth generation of the Honda Odyssey,” engineer Andrea Martin said.

The new Odyssey still looks like, well an Odyssey. It’s retains its trademark lightning bolt (tell the kids it’s like Harry Potter’s scar). The overall design is a little more creased and there’s a new grille, but there’s no mistaking this for anything but a Honda people hauler. The looks are evolutionary but are based on new materials, including high strength steel, magnesium, and aluminum, which help cut the Odyssey’s curb weight by up to 96 pounds. The chassis has a new electric power steering system and a new rear suspension. The transmissions are big the story under the skin. There’s two new ones: nine-speed or 10-speed automatics which replace a six-speed automatic. They team with the company’s 3.5-liter V6, which is rated at 280 horsepower, up 32 from the 2017 model. Collectively this all makes for a quieter, more powerful, and more responsive ride, Honda says.

In its fifth generation, the Odyssey has remained a favorite of consumers, though sales have slipped 5.4 percent to 120,846 units. By comparison, Fiat Chrysler sold 62,366 Pacificas in about nine months, while its outgoing predecessor, the Town & Country moved 59,071 units, for a total of 121,437 Chrysler minivans. Meanwhile, the Dodge Caravan, which lives on as legacy model, had 127,678 sales last year. FCA also added a Pacifica hybrid in December.

Into this still-competitive market, Honda begins another Odyssey. Minivans will never sell again like they did when Baby Boomers chauffeured their two kids and 1.5 dogs everywhere, but now those children of Boomers are parents. They aren’t as shamed or stigmatized over driving a minivan. With this in mind, Honda (and FCA) are still investing in this segment, which offers volume and profits that other companies seem willing to forgo. In 2017, a significant number of buyers are still willing to van up, so the Odyssey lives on better than ever.