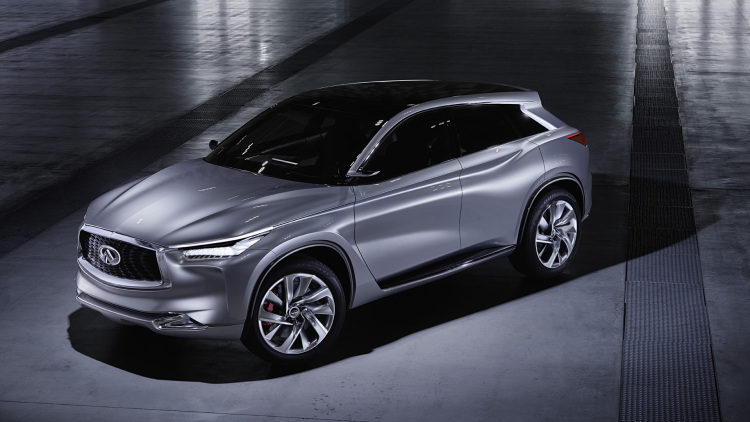 Infiniti’s exterior design has been on point lately. The Q50, QX30, and especially the new Q60Coupe are among the best looking vehicles in their respective segments.

The company’s designers even managed to make the homely QX60 look good. And now, those same stylists have issued their official preview of the successor to the QX70. It’s called the QX Sport Concept and will make its official debut tomorrow at the 2016 Beijing Motor Show.

It’s not hard to look at this stylish concept and imagine the third-generation QX70, formerly known as the FX. The proportions are just right, for one. The rear overhang is perilously short and the rear glass is raked aggressively – both work with the squat greenhouse and powerful hood to cut a sporty silhouette. Even the compact wheelbase seems to fit with the idea of the QX70, a vehicle that was always more about personal luxury than playing the role of a practical CUV.

The QX Sport Concept’s headlights are better looking than the current model’s, but still provide a menacing scowl as they flank the trademark Infniti grille. We like the large, air-curtain-style vents behind the front wheels, too; they’re a more aggressive, functional take on the current QX70’s side vents.

The QX Sport’s cabin is bisected by a high transmission tunnel, emulating the cockpit-like layout of the current model. And like in that car, this driver-focused layout demands driver-focused interfaces, like the flat-bottomed steering wheel and aggressive, single-piece bucket seats. We wouldn’t count on that last item making the production shortlist, though.

Previous post When Your MOT Is Due & Other Questions Answered