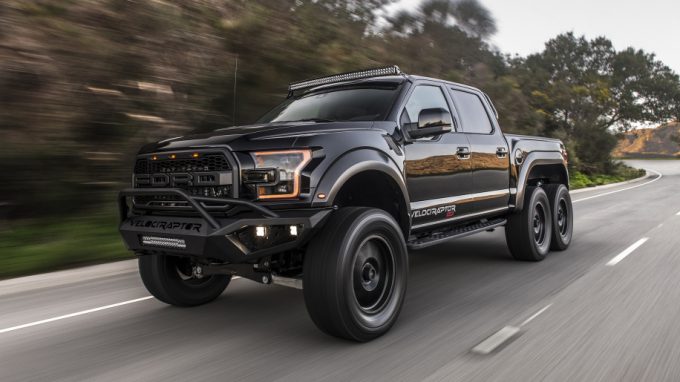 Between the rampant exotics and the lurking classics, it takes some seriously special sheetmetal to stand out in car-clogged Malibu. But this triumphantly conspicuous ride is John Hennessey’s stab at the already imposing Ford F-150 Raptor, a wicked transmogrification of the offroad-effective 4×4 into an over-the-top six-wheeled, three-axle’d behemoth.

The Hennessey VelociRaptor 6X6 starts life as a fully loaded off-the-shelf Ford F-150 Raptor SuperCrew and undergoes extensive surgery that includes sawing and extending the frame rail around four feet, shifting the rear axle aft of a newly installed second axle, and replicating the remote reservoir Fox racing shocks across all four rear wheels which pivot off the frame and are linked by a leafspring setup.

The VelociRaptor’s expanded proportions add about 1,000 pounds to the donor car’s 5,697-lb curb weight. The newfound portliness is countered by engine enhancements that boost the 3.5-liter V6’s output to 600 horsepower and 622 lb-ft of torque, more than 600 lb-ft of which is available between 3,600 and 5,200 rpm.

The VelociRaptor feels big – undeniably, in-your-face, no-way-to-ignore-it ginormous. Hennessey didn’t want to lift the suspension any further because it wouldn’t have been easy to climb into, and his point is well taken: climbing aboard requires a bit of a step up for my 32-inch inseam, but not so much that it’s awkward. Apart from the elevated stance and a limited edition plaque on the dashboard, the 6X6 looks like any other Raptor from the inside.

As for the VelociRaptor’s capabilities off the beaten path, Hennessey admits that while it can be functional off-road, most customers will be buying the 6X6 for show, not for stereotypical Raptor activities like massive jumps and dirt slides.

Who, exactly, is the type of person that has room for this hulking beast in their carefully curated automotive existence? Thirteen examples have been ordered so far, with a total production run of 50. The truck I tested was, curiously, bound for a customer in Tokyo, and other orders have been filled in places like Miami, Tampa, and (perhaps not surprisingly), China.

You might be thinking to yourself, “Doesn’t this thing answer a question nobody asked?” Well, yes and no: on one hand, a $350,000 truck built largely for show does, indeed, seem like travesty to those who view the stock Raptor as a masterful weapon of offroad capability.