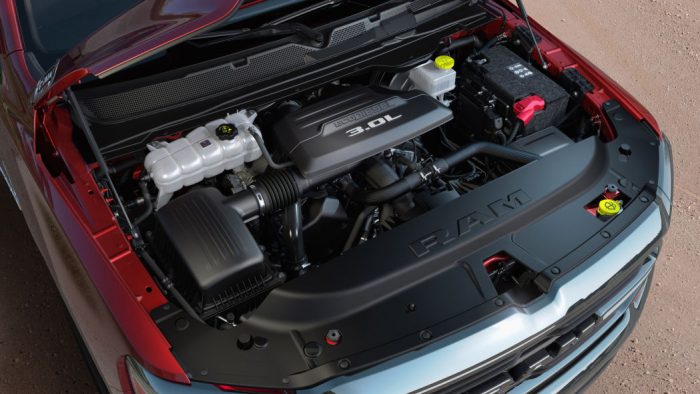 Following on the reveals of Ford and GM’s light-duty diesel full-size pickup truck engines, Ram has finally revealed its second-generation EcoDiesel V6 for the 2020 Ram 1500 and 2019 Ram 1500 Classic. The engine is once again a 3.0-liter V6, but it now makes 260 horsepower and 480 pound-feet of torque.

That’s an increase of 20 horsepower and 60 pound-feet of torque over the previous engine. Ram notes a number of changes were made to achieve these numbers, including adding a water-cooled variable geometry turbo, reducing compression ratio from 16.5:1 to 16:1, adding lighter pistons, revising the intake ports, and using a new fuel injection system and exhaust gas recirculation system.

All these numbers should be announced closer to the engine’s release window of fourth quarter of 2019. The engine will also be available in every single trim and configuration of the 2020 Ram 1500 including the Rebel, which used to be a gas-only trim. The engine will even be available on the 2019 Ram 1500 Classic. This should also be the engine that will soon appear in the Jeep Gladiator and Wrangler.

Previous post 2020 Toyota Supra: How Much Power Does it Really Make?