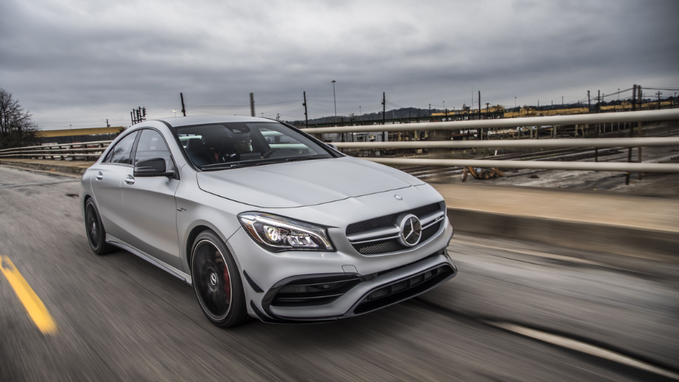 Mercedes-Benz has teased the 2020 CLA four-door ahead of a reveal at the 2019 Consumer Electronics Show (CES). There’s nothing in the dim light that we wouldn’t have guessed from spy shots and insider reports. With the A-Class sedan taking most of the upright and chiseled stance of the current CLA, the new model puts a much curvier glasshouse over smooth forms, mimicking the latest CLS. Autocar says the carmaker is still refining the CLA’s aero details less than a month before the Las Vegas show, and could get close to the 0.22 coefficient of drag of the inaugural sedan even with a larger frontal area.

Mercedes has sold around 130,000 units of the entry-level CLA sedan in the U.S. in almost six years on the market here. Those numbers came when the sedan had no any in-house competition, though. With the platform-sharing A-Class sedan immigrating to the U.S., we’ll see how combined A-Class numbers fare from next year.

The 2020 CLA gets larger and more powerful, and will receive upgrades to set it apart from the A-Class sedan. Sitting on the same MFA2 platform as the A-Class, Mercedes has said the CLA will be longer than the 179.1-inch A-Class.

Front passengers score as well, the CLA said to boast better materials and finishes than the A-Class. The Mercedes-Benz User Experience (MBUX) infotainment system has evolved since its introduction on the A-Class. Among the list of enhancements, augmented reality for the navigation, operation of the Interior Assistant (IA) by indirect voice commands, and an IA that “identifies operation requests on the basis of movements to lend the vehicle interior a certain level of intelligence.” Whatever that means.

Vanilla engine choices in the U.S. should begin and end with the M260 2.0-liter four-cylinder with 188 horsepower and 221 pound-feet of torque. In the greener grass you’ll find two AMG models turning up the boost on that same engine, a CLA 35 with around 300 hp, and a CLA 45 with a touch more than 400 hp. As is the case now, expect an all-wheel drive option and a new, electronically controlled drift mode.