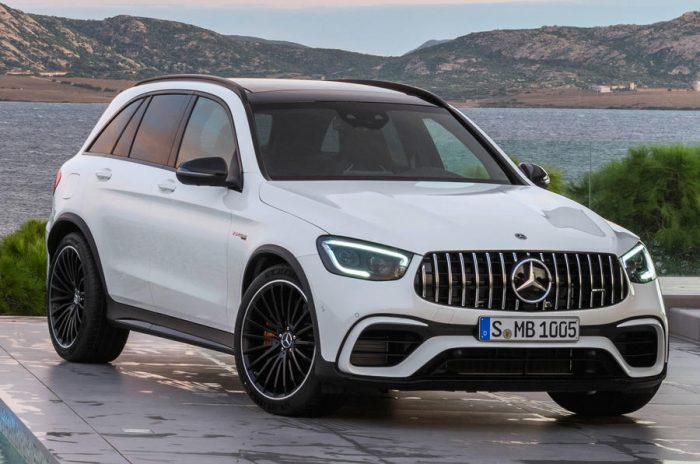 The 2020 Mercedes-AMG GLC 63 S Coupe isn’t a new model for Mercedes, but it did get a major upgrade in the new model year. Mercedes claimed it was the “fastest SUV around the Nurburgring” when it launched, but Audi now claims its RS Q8 is quicker by a full seven seconds. Still, the AMG did it in under eight minutes, which is bonkers for an SUV.

This time comes courtesy of a handcrafted 4.0-liter twin-turbo V8 making 503 horsepower and 516 pound-feet of torque. It’s not as powerful as the GLE 63 S with 603 horsepower, but we were hardly missing it on the way to 60 mph in just 3.6 seconds. Yowza, it’s fast. Since it’s an S, the top speed is 174 mph, as opposed to the 155 mph top speed of the non-S. Mercedes’ nine-speed multi-clutch transmission does the shifting, offering quicker response than a traditional torque converter automatic. Mercedes adopted the lightly refreshed 2020 GLC-Class Coupe styling in the full-on AMG model, and it also provided a big update to the tech. This car is running Mercedes’ newest MBUX infotainment system that debuted on the A-Class, a big improvement in speed and functionality over last year’s infotainment tech.

This being the “Coupe” version of the GLC 63 S, it also features less than optimal rear headroom and cargo space. The frumpy rear end gets a little leaner and more chiseled with the revised styling for 2020, but it’s still a strange looking vehicle. That rear spoiler that juts out and into the driver’s line of sight is even stranger to behold on the outside.

As you might expect, it was an absolute riot. Mercedes lets you turn off stability control and slide around in circles for as long as you want. The 4Matic all-wheel drive system is happy to send huge power to the rear wheels whenever you ask for it, turning the SUV into something of a rally crossover. It’s even playful with traction control off and stability control in sport mode.

That being said, we’ve so far glossed over the show piece of this AMG: its twin-turbo 4.0-liter V8. At 503 horsepower this is, and it’s strange to say this, one of the less powerful versions of the AMG engine. It still packs a wallop that will have you hurtling past the speed limit quite easily. Power comes on impressively smoothly, though, so it’s easy to keep it under control.

It never got painfully loud, and the exhaust note didn’t drone. This is one car you can be loud all the time and not get tired of it.