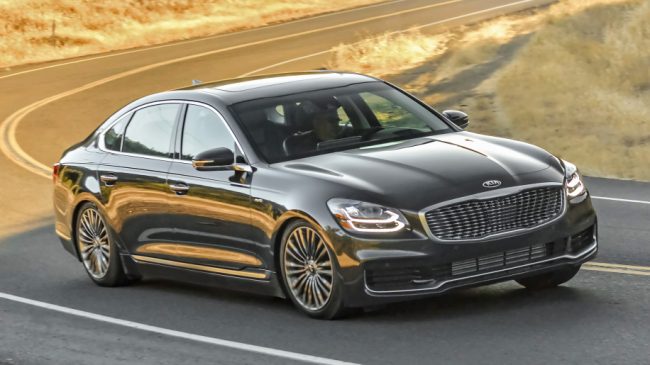 The Kia K900 has been an afterthought in the luxury market almost since it was launched about 4 years ago. Or maybe a never-thought. Through September of this year, Kia sold just 260 examples, which was about 90 fewer than the same time last year.

The Cadillac CT6 is in a similar predicament with just 265 horsepower from its base engine, and the Kia’s output is only exceeded when opting for one with the 404-horsepower twin-turbo V6, which also rings in at over $64,000 with no options. Only the Lincoln can beat the Kia’s power for the money with its 400-horsepower engine available at a base price above $52,000. But you’ll bring it up to nearly $60,000 matching the K900’s features.

The interior of the K900 mirrors the exterior. In this case, the design feels like an amalgamation of many other flagship luxury cars. The low, wide dash that bows outward has a distinct Mercedes vibe, particularly with the aluminum-finish piano-key style buttons and analog clock (which Kia proudly notes was designed by Swiss watch brand Maurice Lacroix).

It also has a trick feature in which activating the turn signal pops open a video window showing the blind spot on either side of the car. It’s wonderful and we’re surprised it isn’t more common in the luxury arena.

The K900 is Kia’s range-topping halo vehicle, something that both elevates the brand as a whole and demonstrates mastery of its mission. The former is a mixed bag; without a stronger identity, it doesn’t give us a clear idea of where Kia is headed. In that realm, the lower-tier Stinger is actually the spiritual figurehead of the brand. But in terms of individual bona fides,

Next post Aston Martin's Project 003 Could Have A Name: Valhalla