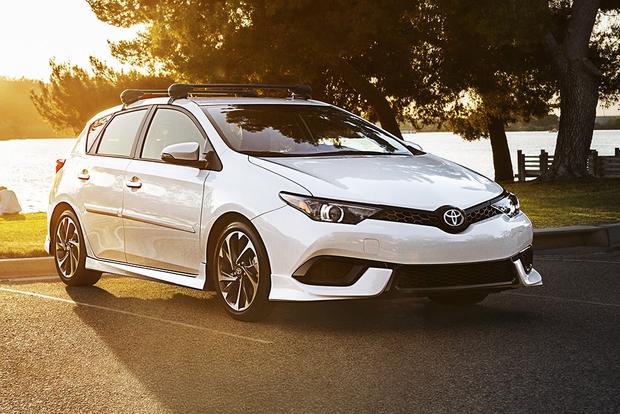 The 2019 Toyota Corolla Hatchback is the 12th generation of the best-selling car in history. Seriously. The car has been around since 1966 and has outsold models like the original Volkswagen Beetle, the Volkswagen Golf and the Ford F-Series. While the sedan might be the most popular variant in America, the only version of the 2019 Corolla we’ve seen so far is the hatchback. Expect other variants to make their debuts this auto show season.

The 2019 Corolla is powered by 2.0-liter naturally-aspirated inline-four making a respectable 168 horsepower and 151 pound-feet of torque. That’s nearly as much as some of the turbocharged competition. Power is sent to the front wheels through a trick CVT that uses a regular first gear to make off-the-line acceleration a bit smoother. Our test car was the SE trim. It came equipped well equipped with LED headlights, keyless entry and ignition, automatic climate control and in-car wifi. It also comes with standard safety features like pre-collision with pedestrian detection, lane-departure warnings and full-speed adaptive cruise control. All that for $21,000.

Editor-in-Chief Greg Migliore — The Toyota Corolla is one of the standard-bearers for the compact car segment. When you think of a small, reliable car, you think of the Corolla. The problem is the most recent execution of Toyota’s warhorse is middling. The Honda Civic, Volkswagen Golf, Mazda 3 and maybe the Hyundai Elantra are all more fun-to-drive, have nicer interiors and/or better styling. It’s a competitive segment and Toyota earns more than its share of sales, but that’s largely based on the company’s reputation for quality. The hatchback we tested is pretty cool looking (Scion would have loved this).

Senior Editor, Green, John Beltz Snyder — I got into the Corolla Hatchback expecting to be unimpressed. Turning the car on and fiddling with the infotainment, my expectations were already bearing true. The touchscreen was exceedingly slow to respond, and pairing my phone proved to be a pain in the ass. Furthermore, I struggled to find a halfway decent seating position.

Then I put the car in gear and started to head home. As I focused on the driving — making my way across four lanes of Woodward Ave to get to my favored route to the highway — my mood started to change. Against all odds, I was actually enjoying this car. It was quicker than I expected, and the CVT mostly stayed out of the way. Getting up to highway speed was surprisingly easy and smooth. Darting through gaps in traffic was a cinch. I was able to carry a surprising amount of speed through the curves.