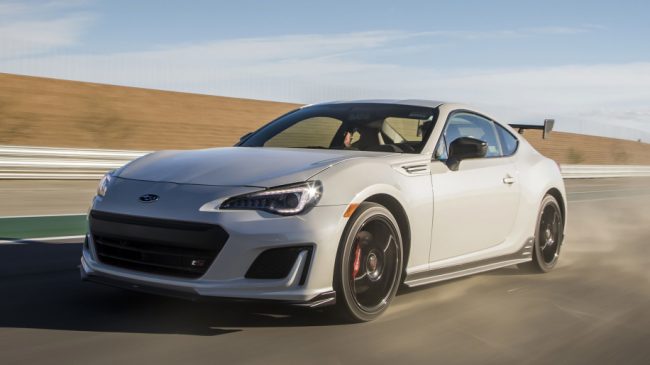 It’s a little hard to believe the Subaru BRZ and Toyota 86 (formerly the Scion FR-S) are entering their seventh model year. Both cars debuted back in 2012 and, save for a minor update last year, the cars remain unchanged. Power still comes from a 205-horsepower naturally-aspirated flat-four. That’s not a lot on paper, but it’s decent enough for a car that comes in under 2,900 pounds.

This particular test car is one of just 500 tS special editions coming to the U.S. In addition to the wing, side skirts and wheels, the tS gets Michelin Pilot Sport summer tires, Brembo brakes, Sachs dampers and STI strut braces. It makes the tS the sharpest and best-performing BRZ in the car’s seven-year run. You do pay for the extra kit, and if it’s not your thing, you can still get a pretty well-equipped car for around $30,000.

Consumer Editor Jeremy Korzeniewski: Not surprisingly, a pair of braces to stiffen the chassis, stiffer springs over Sachs dampers, big Brembo brakes and Michelin Pilot Sport 4 tires on lightweight 18-inch wheels all conspire to make the tS the best Subaru BRZ I’ve ever driven. There’s an aggressive body kit, too, but my time with the tS was limited to some fun runs on public roads, so I never hit the speeds where you’d really experience the aero benefits.

Even with an irritating lack of horsepower underhood, the BRZ remains one of the best cars in America for driving enthusiasts due to its perfectly balanced chassis. And if you want the best BRZ money can buy, the tS is your ticket, if you can manage to get your hands on one of the 500 earmarked for sale in the United States this year.

Associate Editor Joel Stocksdale: The Subaru BRZ tS was both better and worse than I expected it to be, and it’s kind of for the same reason. Starting with the positive, it’s surprisingly livable on real-life streets and roads. Despite the monster carbon-fiber rear wing and aggressive body kit, it actually feels very much like a normal BRZ. Which is to say it’s definitely stiff and bumpy, but you won’t be rubbing your backside or reaching for some ibuprofen when you get to your destination.