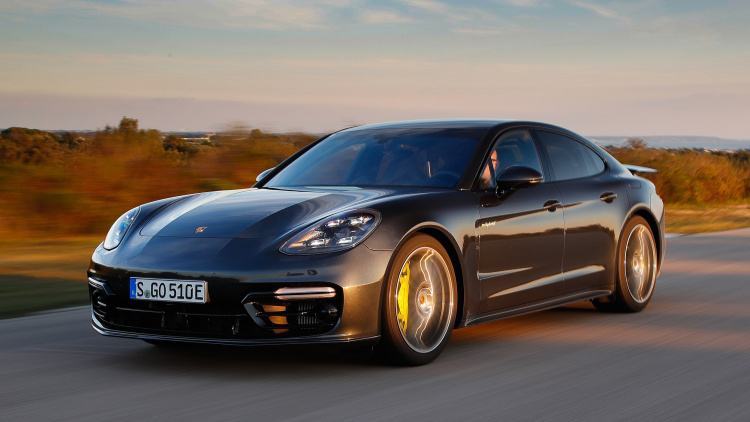 It’s OK if you haven’t yet nailed down the name of this one. Porsche Panamera Turbo S E-Hybrid is a mouthful for sure, but it’s also a big moment for Porsche. The former top-tier Turbo S model sports a hybrid system for the first time, an obvious sign of how Porsche will electrify its future.

Thanks to the gone-but-not-forgotten 918 Spyder supercar’s high-performance hybrid system (and the less powerful Panamera 4 E-Hybrid that utilizes a V6) this isn’t new ground for Porsche. Even so, company officials still want to ease people into the E-Hybrid addition. Think of the Turbo S E-Hybrid as the heir to the 918’s technology and spirit, rather than a ploy to cut emissions on their most potent and expensive Panamera.

The Turbo S E-Hybrid takes the Panamera Turbo’s already thunderous 550-horsepower, 4.0-liter twin-turbo V8 and mates it to a 136-horsepower electric motor, for a combined output of 680 horsepower and 626 pound-feet of torque. That’s a bit more than 200 horsepower shy of the 918, but a startling amount for any regular production car – let alone one that happens to be a hybrid.

For now, at least, the $184,400 Turbo S E-Hybrid has few four-door rivals. There’s still no BMW M7 and a performance version of the just-announced 2019 Audi A8 has yet to be announced. The newly revised Mercedes-AMG S 63 is does the luxury part well and actually has more torque than the Panamera, but weighs nearly as much and doesn’t defy Newtonian physics quite like the Porsche does around a track.

Which is a great achievement for Porsche. Some kind of packaging miracle would be needed to fit this setup in a rear-engined car, but it doesn’t seem crazy for an upcoming 911 Turbo S to follow the Panamera’s performance-hybrid lead. It might be a mouthful, but both parts of the Turbo S E-Hybrid complement the other, on the track and on the road. It’s still a sports car first, a luxury car second, and a high-tech object of desire third. Watch your six, Tesla.

But for today, the Panamera Turbo S E-Hybrid benefits from hypercar trickle-down technology to shine as Porsche’s futuristic four-door electro-supercar.