The 2018 Kia Stinger is a provocatively named, turbocharged fastback sedan that arrives in America in a few months, and we’ve just been given a great snapshot of what to expect at Germany’s notorious Nürburgring circuit. 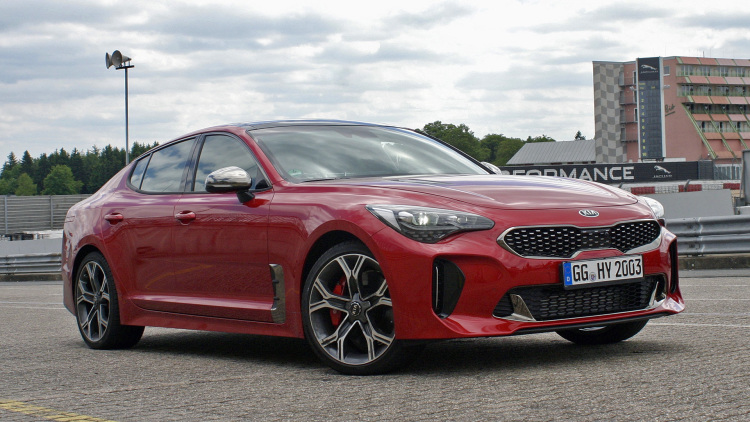 While the very final tuning is under way, the late-stage prototypes we drove are “99 percent there,” says Albert Biermann, former BMW M chief engineer, now head of engineering for the Hyundai Group. Despite our first experience with the Stinger being at a famously technical track, Biermann and others stressed that the Stinger is very much a grand tourer. To be clear, just about no one will track the Stinger. So why then do we find ourselves in the Eifel region of Western Germany? Because Korea’s new sports sedan signals a dramatic brand shift for Kia, and the Stinger GT is the first to reflect a new, more performance-oriented direction. Kia at the Nürburgring? If you want to make a point, this is one way to do it.

Arriving this fall, the Stinger will have three powertrain options on offer globally, but only two gas-fueled turbocharged engines for North America. The entry-level Stinger 2.0T is rated at 255 hp and 260 lb-ft, but our impressions are based on the GT, motivated by Kia’s brawnier 3.3-liter twin-turbo, good for 365 hp and 376 lb-ft. Peak power arrives at 6,000 rpm, and peak torque between 1,300 and 4,500 rpm. All engines — including the not-for-America 2.2-liter diesel — are mated to an eight-speed automatic transmission with shift paddles. Both rear-wheel drive and AWD configurations will be available.

While the automaker has made some sporty-looking, attractive sedans such as the Optima Turbo, and Cadenza, it wants to “make them drive like they look,” says Biermann. Throw the ‘Ring’s 73 corners, 17 percent incline, and 11 percent decline — all at speed — and you’ll learn quite a bit about Kia’s newest, very quickly.

On the inside you can see clear cues from the German counterparts in the segment, with Burmeister look-alike speakers surrounded by a faux-metallic finish — there’s also an available 720-watt, 15-speaker Harmon Kardon surround-sound system — three cylindrical air vents on the center stack, and the 8.0-inch infotainment screen tacked above the dash. But overall the cabin is comfortable, roomy, and attractive. There’s plenty of head and legroom in the rear, and despite a high beltline, visibility is good.

While Kia says it’s aiming for the Germans, like the Audi A4, BMW 4 Series, or Mercedes-Benz C-Class, you’d also have to consider the Inifiniti Q50 and Lexus IS to be competitors. What buyers actually will cross-shop with remains to be seen, but with the Stinger, Kia is making a deliberate shift into a more premium space.

The 2018 Kia Stinger GT will arrive in America in October, and there’s much we still want to assess between now and then. But what’s clear is the Stinger will be the most appealing Kia we’ve seen yet. With striking design, a level of dynamic handling and capability never-before experienced from Korea, and more allure than anything wearing a Kia badge, we’re looking forward to getting more time with the Stinger.